Two women grew up in the same neighborhood of the same town, one a year older than the other. After they finished school, they each went into the business of nursing to the sick and elderly. Both had reputations for kindness. The younger of the two women, shorter and stronger, grew nervous over the years. Her sleep grew restless. Her health had been excellent when she was young but, finally, one day on the job she passed out from exhaustion.

The next morning, she lay in bed recovering. She improved as she talked with her first two visitors. However, the next person who came to her bed was the thin, older and more famous nurse. In a few minutes, the younger one began throwing up.

She didn't stop vomiting until her friend left. The other nurses noticed her symptoms. They conferred and decided to call for their boss.

“I hear that you're unhappy with your visitors,” said the senior nurse when she arrived.

“I have no idea. I mean, just look at my friend who came earlier today. She does the same things I do. She's satisfied and at peace with herself.”

“I know her. And I know you. I see a great difference in the way you do things.”

“No, there's no difference.”

“You think there isn't because you compare yourself to her. You mirror what she does. You're careful that there's no gap between her achievements and yours, right down to the small, virtuous habits that make her so good.”

“Can't you see that's the difference? She loves you but she doesn't measure herself by you. She doesn't act nice to others in order to compete with you. She does it because she feels that's it's right to be that way.”

“Sometimes, yes. But when you try to imitate your friend, it wears you out.”

“It shouldn't. She was always the sickly one when we were growing up. If anyone is getting tired, it should be her.”

“Really? Who is going to be better at being her? Who needs to work hard and who can just be herself?”

Not Zen 90: The Laughing Master

“Why do you laugh so much?” complained a disciple to his roshi. “Other devotees are much more strict than you.”

“I am not a master in a temple,” replied the teacher, “and that is one reason. Also, I am strict when there is a need, which is fairly often. When I do not have cause, I see no need to hide my joy. I learned this view from my teacher. When I was young, I felt he was far too carefree."

“You also had a master who laughed too much?”

“Exactly.” The disciple nodded. The other students of Zen, all seated around a table eating their lunch, did the same.

“I prepared a short speech on the subject, which I dared to give in the dining hall." The roshi smiled at the parallel since his group of students was seated. "But thankfully before I could give my speech, one of the other students, a fellow who had been ordered to bring our food, slipped. He was carrying four small tureens of soup. Each tureen had a lid. When he went down, the containers and lids flew up. The soup flew out. Of course, the pots and utensils came back to earth. They made a lot of noise. A spoon hit the poor student. Then a tureen landed on his head like a dunce cap. A lid clanged off the tureen while it was still on his head.”

The roshi’s students began to giggle at his story.

“Yes, it was very funny. I had never seen anything quite so funny looking. And then a second lid came down, too, and hit him on the head almost where the other one had hit. My fellow students burst into laughter. We fell almost in tears with laughter. Only one man did not laugh.”

“The student who fell?”

“My master did not laugh. He had not been standing close to the spill but he nonetheless arrived in time to catch the second lid before it hit the floor. He set it aside gently and checked to make sure that his student was not hurt. Truly, none of the rest of us wanted to see that fellow bruised or burned. He was a friend to us all. But his fall … to this day, the memory of it can make me smile. Then I think of my old master. He, who took joy in nearly everything, had simply taken action. Who can doubt that he was right?”

The students turned back to their places at the table and ate their lunches in silence. 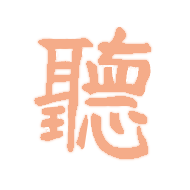 An old man had been studying at his local temple for decades. For the last few years, he had remained silent. He spoke to no one, not even to the masters, and the head of the temple permitted his behavior even though the man was not a member of the clergy, only a visitor, and had taken no vow of silence. In time, no one thought it was unusual or rude.

The old man swept the floors in every room. He did it every evening, sometimes in the mornings or after large gatherings. He had another job outside of the temple and monastery.  Here he was a volunteer. He came and went as he pleased.

One day, a new student at the temple wandered into his dormitory. He watched the sweeper for an hour or so. Every so often, the new student looked to his fellow students to see if they were watching. They weren't.

The next day, the student came back to his room while the silent fellow was sorting the trash. He sat next to the old man and helped.

"That was a good lesson you gave yesterday," he said. "Why doesn't the head of the temple make all of students attend?"

This made the old man think for a while. He had not been silent in the rest of his life, only during his visits to the temple.

"There would be no point in that order," he replied. "I have been setting the same example for three years. You're the first one to remark on it besides the master."

"He provides a silent sermon through you."

“There are such sermons everywhere you look.”

“Even outside the temple?”

The old man returned to his task sorting the trash.

The girl realized that she wasn't being polite. She skipped through the front door and onto the screened-in porch, where her mother could notice her when the time was right.

"Momma, can you see someone's soul?" she asked when she got tired of waiting.

With a sigh, her mother closed the book. She leaned forward in her chair.

"No one can see a soul," she said. "Souls are hidden inside. If they exist, they're always changing. They live from moment to moment, like sparks of electricity in our brains and hearts."

Her mother shook her head. "No."

The girl pointed to the family cat.

"Not even the cat can see them," her mother said. She let her hand drop low, near the floor. The cat trotted over to it and rubbed itself on the fingers. "Souls might be fluctuations of chemicals in cells and between cells. We can't see them inside people. Cats can't see them. No one has the right eyes to see the pictures they make. They might be beautiful. But we'll never know."

The girl turned and marched away. She wandered from one room to another until she spied her father in the back yard. He knelt in the dirt as he transplanted a sapling maple tree.

"Daddy, can you see someone's soul?" she asked as she burst out the back door.

"Of course. So can you." He stood and picked up his spade. He sank the metal blade into the pile of dirt next to the tree. Then he paused and glanced at his daughter. "In every smile and frown, in every action and in every hesitation, we see one another's souls."
Posted by Secret Hippie at 5:30 AM No comments:

A master of a Daoist temple went to visit the nearby government office. From that large building in the center of the city, his temple received grant money for its projects in the community. On this day, the master's appointment was first and he arrived with time to spare. He walked into the lobby as light dawned. Immediately, he introduced himself to the other early arrivals and to the security guards. A junior officer brought tea for everyone.

As the master chatted, he noticed a janitor who he knew from the temple a few years earlier.

“Is it student Jeffries?” he called. He waved as he strolled over to the man with a mop. “How nice to see you again.”

“Good morning, master.” The student bowed respectfully. He showed no sign of the impatience for which he had been famous when a member of the temple.

“You left so suddenly.” The master sighed. “I worried you might have taken your life. You know, you struck me as a prideful student but a promising one. Many of the older monks were disappointed when you grew frustrated so quickly. May I ask you what you are doing now aside from cleaning these offices?”

The master looked around at the trappings of wealth and power. There was a fountain in the lobby. There were marble stairs. The doors and fittings were glass and brass. Above them hung chandeliers of finest crystal.

“You have cast a fishing line high into the treetops,” said the master with a slight bow. “But I can't complain because I do it, too. Who knows? Maybe you will find a fish.”