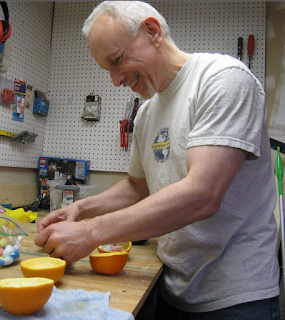 Bright like a sword, your wit beguiles
and I live to witness your daydawn smiles.
I never notice a crease in your eyes
or mark the spaces between your sighs.
I don't see your roots of gray
and I can kiss your years away.
All I ask is that you be my friend,
blind to my earthly body's end.

I sigh for the days and chances past
but can be contented with what will last,
which isn't loves or shallow goals
but peaceful joy within our souls.
So live with me and be my bride.
Forever feel my youth inside.
Dream of me with light brown hair
and overlook the silver there.

Wanna Be for Momma Dee
Wanna be the gas line meter
to warm you up, cook out.
Wanna be the electric heater
you’ll get cold without.
When you like your java hot
I wanna be your coffee pot.

Wanna be your vacuum robot
sweeping in your dust.
Wanna be your sexy dreadnaught
revving up your ... trust.
When you like your homestyle bright
I wanna be your bedside light.
Posted by Secret Hippie at 5:30 AM No comments:

“Your meditation seemed intense, master.” The businesswoman approached, hands clasped in front. She inclined her head toward the master.

He scowled. Self-consciously, she glanced down to notice that she was dressed in her office clothes. Her teacher had never liked displays of wealth, such as business suits, but she had stopped by to visit the temple on a whim. The building was on her way home from work. Only when she had stepped through the door did she notice the elderly monk. He had been sitting on a mat in the shadows. Three other, empty mats lay in different spots around the room, left there by previous meditators.

“I had been contemplating samsara in the form of this coin on the ground.” The master stirred. He gestured to the dark spot on the floor near the corner. It was conspicuous on the polished bamboo wood floor. “It is good to think on the deceptions of material reality, especially wealth. Much human anguish results from the pursuit of riches."

He paused to look at her more closely, so she nodded.

"Gifts are well thought, of course, and I would not be able to live a monastic life without donations." He seemed to think ahead to objections that she might have, although she didn't have any, really. “Yet misery, quite often, is transmitted along with money.”

“A worthy subject for thought,” she murmured. The businesswoman kept her voice low, as the old monk was a severe man who felt that students should not express their views except in response to a direct question.

“You have recently finished your banking transactions, I gather.” His tone remained flat and slightly disapproving.

She removed her jacket and bowed to her teacher. She had been intending to pray for the health of her daughter. Now she thought that a few quiet moments in meditation might be best. She focused on a mat near the corner. That one would put her next to the coin, so she could join in the contemplation of material detachment. Given her teacher’s mood, it was the right move. She was glad that she was a casual student of his and not a more serious one. Her job was quite necessary for her circumstances. She did not want to be under pressure from him or any other monk or nun to take a humbler, more spiritually acceptable position.

She strode toward the corner, where the smallest and most faded statue of a disciple would sit by her left shoulder. As she reached her mat, she stopped in confusion. For a moment, she wondered if she should speak. Then she realized that, if she did not, the master would later discover what she saw. He would know and perhaps he would suspect that she had laughed to herself about it. Either that, or he would know her for a coward.

“Forgive me, teacher,” she said. She tucked her jacket under her arm. She did not bow, merely leaned in his direction and gestured to the floor. “Perhaps your eyes are not what they once were. This circle is a drop of paint left by the workers who visited the temple yesterday. We had a pair of them in this room.”

“So we did.” With a grunt, the master rose. He strode to examine the coin. He tried to move it with his toe. It was a perfect circle, the right color. But it did not move. Because it was paint.

He closed his eyes to reflect, apparently, upon his practice of detachment.

"I have spent a very good hour. My thoughts were based on an error. However, my senses, even at their best, have always been slightly in error. The examination of samsara, by which I mean the misleading nature of the material world and the suffering cycle of life and death, is filled with errors."

“Nirvana is still freedom from the fears of the endless cycle of life, death, rebirth, and re-death,” he said.

“It is rooted in the lack of desire for sensual things.”

“So I am given to understand.”

“Samsara is deceptive,” he concluded. His face was flushed. There was a hesitation in his voice, as if he was searching for better words. "No amount of honing perfection ever makes one perfect."

“No one can deny those things.”

He sighed. "Thank you for speaking up."

Sonnet 11.6
Let me not to the marriage of true fools
Admit encouragements. Lovers escape
That which impedes them by breaking the rules
Or by making their beds in the landscape.
Wise fools know they're simply suckers and marks, Always blown over, easily taken,
Loved in the dirt of our national parks,
Hearts awakened by our bodies shaken.
Everyone is a fool, in love or not,
And it's better that our hearts be beguiled
Like our bodies, hot in a sweaty knot,
Than to be the same suckers undefiled.
When we're not in error, it's just by chance. To error for love is how we advance.
Posted by Secret Hippie at 5:30 AM No comments: