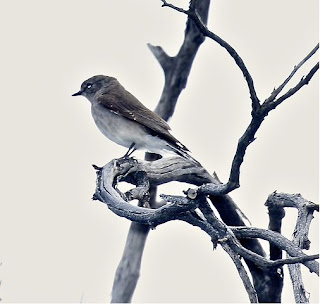 "I thought I would be happier by now," her brother said. He spiked his dead cricket on a thorn. "Are you satisfied, yourself?"

"There is no need for the question," she replied.

The two butcherbirds fluttered from his larder patch to hers. It wasn't far, simply to the next bush. Their colony lived in a grove of paperbark trees above a thicket of wild grass and vines. It was a rich territory for the butcherbirds, full of brambles, thistles, flowers, lizards, and bugs of every kind, all attracted to the blossoms and loose, dry soil. This morning she'd found a green meadow katydid. She added it to her stash of food, which had grown bare as she'd raised her children.

Three days ago, her children had flown. She had set about replenishing her larder with pine beetles, darkling beetles, lizards, black flies, cabbage butterflies, and moths. After she added the katydid, she hopped back to admire the results of her handiwork.

"Do you think I know your mind?" her brother asked.

"I think you know your own joy." She stretched her gray wings.

"Well, then, I'd say that moments of happiness are fleeting. That is how they are to me. They seem sustained in you. That surprises me." She cocked her head toward him. He shuffled his claws and stammered as he tried to explain. "I dread the hardness of the coming summer. My anticipation makes this spring bitter. Yes, we have plenty. But don't you fear the coming drought?"

"Don't you appreciate your easy life today? Joys may be fleeting but there are an endless number of them. Everyone's daily experience is filled with an infinite variety of delight."

"I mean like experiencing the treasure of each moment." She took a deep breath. "This morning, I am refreshed by the presence of my brother. Better, there are no predators in the sky. There are no men near the thicket and no dingos."

"You are merely feeling relief."

"Reliefs from burdens are flavors of joy.  I would never casually dismiss them."

He glanced at a black spider as it hopped from the bark of the nearest tree. It was smaller than the tip of his talon. Since it wasn't big enough to put in his larder and he wasn't hungry, he ignored it.

"It's not that you don't have the same indulgences in your life," she continued. She'd watched him disdain what a smaller or hungrier bird would have eaten. "It's that you don't bother to appreciate them."

"How can you notice such slight feelings?"

Her head leaned back as she studied the trees and branches.

"At this moment, I see young ones in your nest," she said. "They fill me with pride in you. I hear my children singing nearby. They cause me to laugh. My mate casts a shadow from a bough above us. When I look up and see the glint in his eyes, it makes me swoon."

"I wonder if I have that effect ..." His gaze shifted to his tree.

"On your mate? Of course you do. I've seen it. Don't you remember how she danced with you? Sang with you?"

"Yes." The whole flock had seen.

"And wasn't it wonderful?"

"And wasn't dancing with her different than singing?"

That took him a moment of thought but the answer was definite. "Yes."

"Come, feel the separate joys. Experience the gladness in your limbs for a moment." With that, she snapped her wings for five quick beats and lifted herself between the trees. Seconds later, she rose above the treetops.

Her brother hesitated. He searched for predators in flight. Then he launched himself to meet his sister. He maneuvered along the arc of her path until he occupied a spot near her right wing. She circled the grove, so he followed. He gazed down at the leaves of the trees and at the thorny grasses. His sister dipped her wings toward the northeast boughs of their home.

"As I hover above the flock," she said. "I'm inspired by the beauty of it. Each and every butcherbird is magnificent. The branches of the trees entice me. The brambles below seem sweet. The thistles are sublime. You may think of it all as mundane but such moments are precious to me."

"I've felt the way you describe," he sighed as he remembered. "It was in a morning fog."

"I recall a day like that, a heavy mist."

"Yes. And for me, there was a quiet wonder of stillness." He nodded to himself as he flew.

"What made the moment special was how you took time to appreciate it." She inclined her beak to the horizon. "There are so many joys. There is pleasure in each taste of food, in each sense of the body. There is wonder in hopping on supple branches and dancing. There is a thrill in abstinence from food, from stopping before eating too much and feeling slow. There are so many things, each unique. I can't possibly list them all."

"The joy of wisdom?" he offered.

"Really?" She hesitated. "I hadn't thought of it but I suppose so."

"Perhaps there's a joy in seeing someone you care for grow wise."

Their path swung them around the edge of the paperbark thicket and the roosts of their flock. They stopped flapping to gain altitude and glided along in silence. She absorbed scents in the winds and the colors in the clouds and boughs. Her brother thought of nothing at all. In time, he noticed a young butcherbird below. He caught a glimpse of it as it passed among the leaves. It hopped to the fork of a branch. The branch trembled.

"That's one of yours," his sister said. She'd caught the distinctive motion too. "This is a special moment. Your first child has left the nest. She is not yet flown but that day will come soon. Go to her now. Be her proud father."

It was, as his sister said, his tree, his branch. He circled down and alighted on the bough directly above his fledgling. He didn't want to disturb her. He merely watched. When he saw that her position was secure and that she was followed at a distance by his mate, he cooed to her. She gazed up at him.

"Beautiful child," he said. His mate cooed in agreement.

With care, he fluttered down to his daughter. He landed without shaking the branch. His mate held still. His daughter stared.

Then his daughter did an unexpected thing. She turned her back on him and walked farther down the thinnest fork of the branch. A few, long seconds passed before she turned around. Her eyes locked with his. She asserted her confidence in herself without a word. He felt amazed by her bravery, walking so far before she could fly. He felt awed by her fierceness of spirit.

For a moment, his child resembled his sister. Her gaze was so clear. Already, she knew her mind. He told himself to be thankful for the moment because it held a flavor of joy unlike any other. His daughter would fly away soon.

But he found the moment too easy to appreciate. He didn't need to remind himself of anything.

"I could have missed this," he breathed.
Posted by Secret Hippie at 5:30 AM