I have seen these machines in architectural drawings, Denario wrote. They were commonplace in ancient times. They are not popular now so I suspect that only a few accountants would understand them. Apparently, great-grandfather Bodker built them for his irrigation system ninety years ago. I don't know if he was a solitary genius or whether he learned of the concept through traders. At any rate, he used six machines and a series of wooden aqueducts to bring water from the creek to his fields, forge, barrel works, and home. In Anghrili, these machines are known as 'water screws.'

That name did not come to me when I walked to the northeast edge of Barrel Bad and saw the wooden tubes. In fact, nothing helpful came to my mind. I didn't recognize them as man-made. The first one was broken and overgrown with moss. It looked like a dead tree, fallen over. Where the surface of the thing wasn't supporting wildlife, it was half-covered with tar.

What I saw looking into the cracked barrel of the water screw was this:

The slope of the outside of the screw's helical blades with respect to its sides is 2. 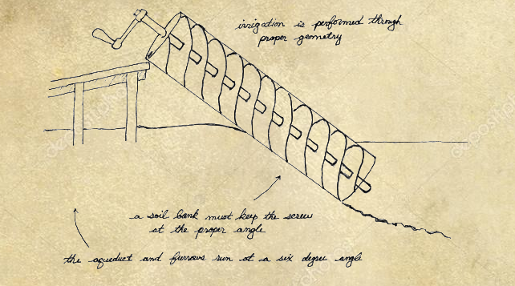 This requires that the slope the screw makes with respect to a horizontal line be less than 2 (an angle of 63°) in order for pockets of water to form. Upright, the screw does not function as intended.

The blades of the screw were carved from spruce. The core was oak. Between them, attachments were made from screw to core. They do not appear beyond the skills of an ordinary carpenter.

The outer shell was formed from oak staves banded together by iron rings. The cooper used a process similar to barrel making. The tube was a cylinder but, by using different lengths of wood, he formed it as one piece made as if from five barrels laid end to end. The slats interleaved, held together by iron. He must also have used a kind of glue or resin. Even where the iron had rusted away, planks held together.

From the first tube, I comprehended some basic mathematical concepts of the screw. What I didn't understand was what it was doing there at the edge of a field.

'Well, the creek moved, dinnit?' was the answer from Marcel.

So the barrel had sat in the water when it was made. Changing sands had pulled the river bed out from under it, now fifteen yards to the southeast. Local men chimed in with descriptions of how they thought the devices had once worked. From them, I gathered that these devices were pumps.

Clearly what lay before me was not a pump. I tried to understand how these fellows could have mistaken it for one.

'There's a pump what still works some,’ said Marcel. 'It draws up a bit of water from ol' No Map. Otherwise I wouldna thought you could fix any.'

'Aha!' With those words I began, for the first time, to comprehend what I faced. I counted the screw blades I could see. They were all almost exactly eleven inches apart. Given an eight-foot length, mostly covered and hidden from my view, I reasoned that there were nine helical blades pieced together around the core. The pitch of the blades measured at roughly forty-five degrees. They seemed to be about eight inches in radius from the core.

I took all the measurements I could, knowing I would not want to hike back to this broken pump.

About eighty yards further north, Marcel showed me another wooden tube blackened by tar and pitch. This one was in good shape and stood nearly straight up from the creek to the wooden aqueduct that was meant to carry water from it. Although I couldn't see inside, a handle at the top seemed to turn the core smoothly. I heard the blades move. Nevertheless, the machine did not lift any water up to the aqueduct. Since I had no idea of how it was supposed to work, I was not troubled.

How could a screw lift water? Yet somehow, I felt that it once had. At an intuitive level, I began to realize that Marcel was right. I could fix these or, at least, learn the correct geometry of them. I didn't have enough information yet.

The next pump we came to, again traveling to the northwest, lay along a sandy bank. It was quite nearly flat to the ground, which allowed me to see into it from underneath. The end that hung out into the creek had visible, intact wooden blades, apparently part of the same helical arrangement as the one that lay broken. This one spun. I could see it work. The blades touched the water. But the machine picked up nothing and seemed to have essentially no effect.

'Is this broken?' Marcel asked me.

'The mechanism seems to work,' I said. 'I don't know yet why it's stopped pumping. As far as I can tell, it should never have done anything.'

'Well, the next one picks up water.'

The next barrel-covered screw sat at about a 60 degree angle from the creek to the aqueduct system. Marcel turned the handle at the top for a while. Finally something happened. Between the handle and the barrel surrounding it, a trickle of muddy water began to pour. It kept coming. I had to dismiss the idea that it was a trick conducted with a small pocket of water stored in the tube beforehand. No, the machine was lifting the flow of the creek.

Water sluiced down from the opening at the top of the screw into the curve of a wooden plank. Marcel had made an aqueduct out of wood or he had repaired an ancient one about five feet tall at its high end. Wood does not seem to me to be the best material to carry flowing water yet clearly it is what a barrel maker would use and it performed well enough. A wave descended gently at a five degree angle for more than sixty feet before it met the ground in an irrigation furrow.

I fell to my knees in the dirt and began to draw the angles and lengths of the 'pump', the irrigation system, and the slope of the ground, which was nearly level. I had no clear reason to do this. I simply saw that at least two triangles were involved and they formed a greater triangle combined. I had begun to guess that angles were important.

'Are you all right?' Marcel kept asking me that question. So did the other men. I couldn't answer. I was busy thinking.

When I realized that the 'pump' was a water screw, I was nearly done.

'Aha!' I jumped up in the air and whooped. Several men started running away, each in different directions. Perhaps they feared that I was doing magic or I'd contracted a disease. Jack had to coax them back by reminding them that his money was at stake.

Now I faced an impossible problem. I shuffled around, hands on hips, muttering to myself. I was racking my brain for information on water screws and finding very little. I'd read about them but I'd never seen any at work, not even during my trips to Anhgrili, where a famous one still exists. What was the difference between the working screw and the failing ones? Was it as simple as the manner in which they met the water?

My feet carried me ten yards before I stopped. I'd begun the dash back to the previous screw without explaining. I made myself wait.

'Marcel, I want to try something,' I managed to call out before I started running again.

I heard a laugh behind me. Jack the riverman blew by my left shoulder, as fast as a storm wind. Marcel caught me before we reached the flat-lying screw. When we arrived, I was out of breath. But my travels have agreed with my health. I recovered in a few seconds and managed to lift the wooden tube with their help. Where the cylinder had once entered the water, barely, at an angle of five degrees, we arranged it with a ramp of earth and rocks to almost a fifty-eight degree angle. 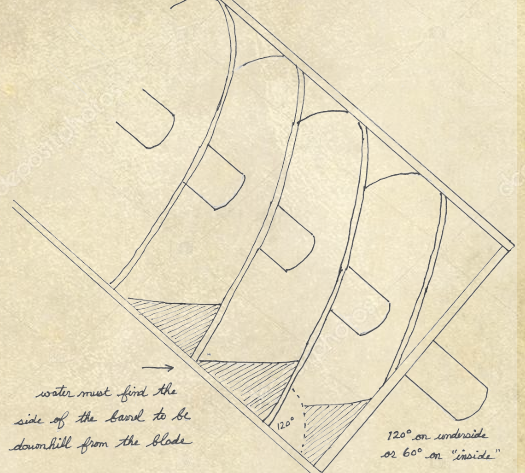 Testing seemed to demonstrate the importance of this geometry.

Posted by Secret Hippie at 7:34 AM