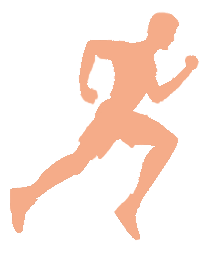 Early one morning, three runners set out along a road. The sun lay on the horizon as they left. Birds rustled in the boughs of trees. The air was cool. All three dressed for the heat. They set a brisk pace.

The leader trotted to the front of the group. He steadied his rate to let his sister catch up. They ran side by side for a mile or so. Her husband loped along behind. The patter of their shoes on the pavement fell to a steady rhythm.

"You hadn't said," his sister replied. "But I could tell."

"You have a pattern," called his brother-in-law from a few yards away. "You leave your kids with your wife more often, like today. You get tied up with your job more. Your wife complains about seeing you less. Eventually, you don't do anything else but work, eat, and exercise."

"And when you exercise with us, you talk about your job. It goes on for weeks. Then you burn out. You can't sustain the pace."

"You have no idea." Irritated with his running partners, he increased his speed. "I haven't reached my peak yet."

He distanced himself from his companions. For a long while, he bounded along in silence. Beneath his shoes the pavement turned to concrete, the concrete to grass, the grass to dirt. The clay soil path widened as it ran alongside a stream. In time, his emotions flagged. His speed faltered. His breath grew labored as he reconsidered his pace. The muscles in his left leg stiffened.

His sister blew past him. She jostled his shoulder as she went by. But she never said a word. He watched her back as she put extra distance between them. After a half a minute, he heard his brother-in-law's soft footsteps growing close.

It occurred to him that his sister wouldn't listen to what he had to say. He wanted to explain himself. He spoke over his shoulder to his brother-in-law.

"I'm getting so much done at work. It's nice. I'm really going all out on a project."

"That's the worst," his brother-in-law told him.

"It means you're trying to do more than anyone can really do."

"Not really. It's a problem of the human condition, I suppose. Animals don't make the mistake of planning more tasks than there's time for. They don't imagine solutions that don't exist or that time can be compressed or expanded at need."

"Bright people have no problems conceiving of things getting done more quickly than possible."

"Well, maybe a little of that," he allowed.

As they rounded the mid-point of their training circuit, his sister slowed down to let them catch up. They swung back along the trail they'd just run. The three of them strode nearly side by side. He decided to continue the conversation as if she hadn't joined.

"But all I need to do is maintain my peak performance," he said.

"Just because you can run a marathon in two hours doesn't mean you can run four every workday," his sister snapped.
Posted by Secret Hippie at 5:30 AM