Not Zen 194: The Meditation Business 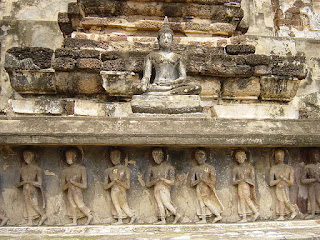 "The past is a construct that your mind creates from fragmented memories as it tries to link them into a meaningful story," said the teacher, a woman in a sky-blue robe at the front of the room. "Likewise, the future is a mental construct. It is an extrapolation from the past."

Her class of fifteen students nodded. They sat on blue mats laid out on the wooden floor in front of her. They wore ordinary clothes, not robes.

A handful of the older students smiled.

One student, a young woman, frowned.

"Only awareness of the present moment can make you successful."

Another student, an older man in a white shirt, opened his eyes and scowled.

"You become successful," continued the meditation teacher, "because awareness is your greatest power. It lets you notice things as they are and observe things that less aware people do not. It lets you take action at the right time for the highest level of accomplishment and impact."

The same handful of older students who had smiled, now sighed. The line of the young student's lips pressed tight with impatience.

The faces in the studio classroom grew calm. For another seven minutes, the class sat in silence, each student in their place on a mat. A timer sounded. The instructor stood, announced a break, and stepped out the studio door. Another woman was there, also in a robe, and engaged in a conversation about the logistics of the next class.

Several of the meditation students walked to the water cooler in the back of the room, farthest from the door. In the line with a cup in his hand, an older fellow shook his head and laughed.

"What's so funny?" said the young woman, Jennifer, who had been the first to frown and grown impatient with the instructor's talk. She occupied the spot in front of him in the line.

"Ah, well." His hand titled to the side. His smile faded. "It's only that I don't think that the practice of meditation should be about material success."

"That seemed ... questionable," Jennifer admitted. She put her hands on her hips. "There was something wrong about the direction she was taking."

"For someone in the meditation business, better meditation is certainly a key to advancement." He shrugged.

"It still seems like the wrong reason. Anyway, the benefit of transcendental meditation applies to everything, everywhere."

"Let's ask a physicist. Madeline," he said to the person in back of him, "has meditation made you successful?"

"That's entirely the wrong question, Jonathan." The woman folded her arms over her gingham blouse. "Meditation has got nothing to do with achievements in physics."

"There you go." The older gentleman, Jonathan, turned to the woman in front of him and laid out his hand as if his friend's opinion was all of the proof he needed.

"But you're here to improve your practice," countered the younger woman. She turned to Madeline. "To what do you attribute your success if not meditation?"

"For me, although this will sound strange," said Madeline as she raised her glass to her lips for a sip, "I would say that drawing well was important. It was a small but critical element in my successes. That's not a skill that was critical for others. But for me, it was."

"Interesting. And I believe you're also a physicist, Donald. Is that right?" Jonathan leaned to address the man in back of Madeline.

"Yes. Math is the key." Donald nodded, as if to himself. He was a short, thin man. He wore an eggshell white, button-down shirt and glasses. "Math plus imagination. That's how you achieve."

"Putting imagination to work can be successful," interjected a business woman nearby. She had been the first to get her cup of water. "But by itself, it's nothing. Work is the key."

By the murmurs of assent, everyone agreed with her point.

"There you go," said Jonathan. "Meditation isn't important to success."

"But our teacher says it is."

"Our teacher is a wise woman. I'm happy to learn this form of meditation from her. But you should be concerned to hear her referring to meditation and success in the same sentence."

"Her words are true for a few people," allowed Madeline.

"But they're not for everyone. More importantly, as you, Jennifer ... that is your name, yes? As you pretty much said yourself, there is something wrong with using meditation for worldly attainment. That is not the point of meditation."

"Does that even matter?" Jennifer wondered if her classmates were simply too experienced. Perhaps they took some of the benefits of their practice for granted. "Does your motivation make any difference to the discipline?"

"What is it that you do for a living, Jennifer?" he asked.

"I'm a surgical assistant." That was her job title. She had learned to do more. And she had discovered that calmness and timing were critical factors in her success.

"When you cut someone," replied Jonathan, "does it matter if you intend to do surgery or to kill them?"

"Yes, good." Behind him, Madeline nodded.

"I think that intent probably matters," Jonathan concluded. "Meditating with the idea of worldly success is a different journey than doing it for enlightenment, peace, or awareness."
Posted by Secret Hippie at 5:30 AM