In May 2012 I started posting entries in Not Zen, which led me to discover the logging features in Blogspot. I didn’t think to save the information; the weekly logs came only in picture form and I didn’t realize that the pictures would disappear in a rolling, always-updating fashion. Even when I figured out that the daily and weekly readership snapshots were ephemeral, there didn’t seem to be much reason to try to preserve them. That was partly because I kept looking for real logs, the kinds I know from running Apache and IIS websites. Among the things missing from the Blogspot graphics were details about specific browser sessions and ways to archive the logs.

Despite the crude state of the blogging records, there were a few lessons that I learned early on.


By October 2012, I was starting to find the logs interesting. I got the idea to capture the log files as the images they were. It was the only way I saw to preserve them. I’d noticed changes like the sudden presence of Chinese browsers. Those changes started to give me a sense of the site history. In this log graphic above from 2012, you can see that for the first six months of Not Zen, most of the readers came from the United States. I’d grown accustomed to seeing that, week after week. Then came a sudden appearance of Chinese readers. Where would Chinese citizens have come across Not Zen? How did their technology operate? Was it Internet Explorer on a desktop? Or was it Opera, SeaMonkey, or Instapaper on a phone? Of course, the Chinese citizens could have been like everyone else and appeared in the logs as just more of everything.

I started asking global Internet questions. At the same time, I was still trying to solve very basic problems. 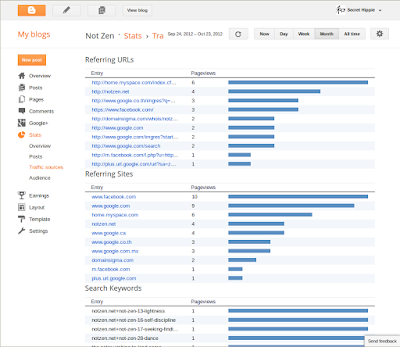 I had trouble with the mechanics of blog posts. My understanding of social media was limited. Everything I tried, I seemed to do badly. My first few links went up on Facebook and G+ but I mis-typed them or included badly rendered graphics. I reactivated my MySpace account because I got the bright idea of using MySpace to test my blog posts. The tests kept me from posting more embarrassing, non-working links in other social media venues.

That’s why MySpace appears in the logs. Google is at the top if you add up the variants of the referring Google sites. Facebook is next. But MySpace looks respectable, early on, because it’s a site that automatically links back to the source. 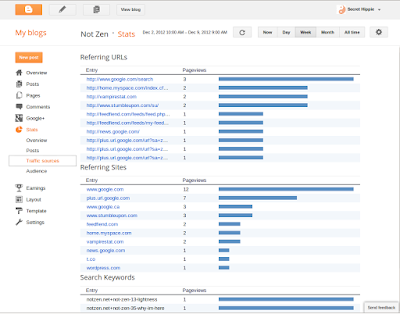 Referrers and search terms provided more revelations. Every now and then, I could see that folks were searching for my stories in Google. It was gratifying but it felt mystifying, too. My friends and my social media sites had links. Who could be looking for “notzen 6 non-action?” That’s a very specific search.

All in all, I didn’t know what I was doing. That much, I knew. So did anyone reading the social media links, I guess.