Early on, hardly anyone clicked on the link to any story. Most of the readers came from a small, kind, and rather literature-oriented subset of my friends. After them came folks who I was meeting in social media platforms. Diaspora had good interest groups for philosophy and Buddhism. The best platform early on was Google Plus.

If you’ve relied on Facebook for all your social connections, this part is hard to describe. In Google Plus, there were interest groups that shared articles and held discussions about them. On Diaspora and Friendica, the articles were even more interesting (although lack of vetting was a problem). The interest groups in those services and a few others seemed to be the equivalent of college classrooms.

Everyone in the groups joined in a discussion on Buddhism, for instance, because they genuinely wanted to trade ideas about it. That’s different from the Facebook neighborhood of relatives, friends, and acquaintances. Your uncle may not want to hear about your hobby. In an interest group, they do. 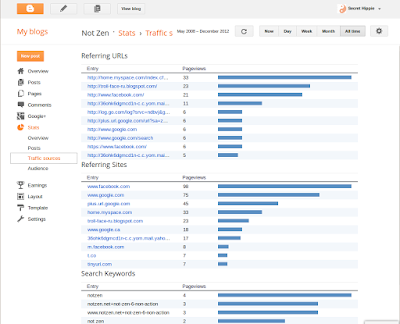 As you can see in the traffic sources chart, there are signs that the social media sites were, somehow, linking more distant readers to the stories. The google.fr (France) site appears. So does paper.li, an aggregator service that tries to be international. A t.co reference also appears. That one belongs to a service owned by Twitter.

I think that it was through these channels that readers in European countries started to triangulate on the site.

By late December 2012, a Russian site made its appearance as a referrer (troll-face-ru). I read about how it was a blog aggregator. According to online author complaints, the site was grabbing material from all over the world and re-packaging it for a Russian audience. Some writers were mad because they were losing advertising money. At the time, I had no ads.

And anyway, the notzen.net site was tiny, tiny, tiny.


Next: It's Growing
Posted by Secret Hippie at 5:30 AM