Not Even Not Zen 208.4: Aesop's Progress - Rise of the Influencers

Part 4: Rise of the Influencers

In first week of January 2014, the story called 'Parroting the Instructor' surged in readership. It was a bump that started when I recommended the link to a project management instructor. He was more than a fun teacher; he was also the author of project management books. I’m pretty sure that he was - and still is - a strong, positive persuader of others. Maybe he recommended the story to other teachers or to his students in classes. I'm just guessing. But it's an educated guess. And I still haven't thought of any other good reason for the bump in readers. 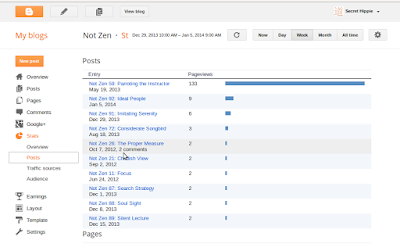 The effect in the logs reminded me of the other people who had recommended NotZen stories. Some of those people and their websites had been influential. Among them:


These people determined for themselves whether a story was worthwhile. And then they spread the news. The True Land monk, Denis Wallez, was perhaps the most influential, not only because of his online presence but because his own, careful writing. His explanation of critical points of Buddhist philosophy affected me personally and inspired some of my later stories. His work appeared in Plus groups and on his own website.

When people like these recommended a story, dozens or hundreds of people browsed to it. 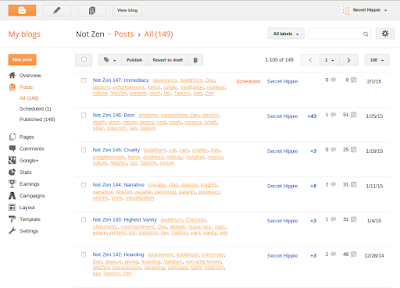 When Denis Wallez recommended the story Best after it was posted in January 2015, folks in the Buddhism interest group started giving it +1. Readership went up. The same thing happened earlier when he praised and reposted Bridge of Promise to the Buddhist and Taoist communities.

Meanwhile, slightly removed from the individual recommendations, the aggregation sites with an interest in NotZen also made their impacts. There must have been people behind the sites, of course. I still don’t know who they are. They left some clues for me, though. For one thing, they came from these three countries:


Early in 2014, these aggregators started looming over everything else.

Next: The Mystery of the Ukraine