Not Even Not Zen 208.6: Aesop's Progress - The Israeli Influencer 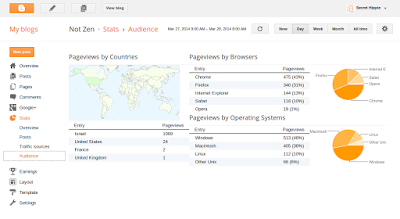 In March 2014, Israel read a story. By that I mean, it felt like everyone there read it. The home page at the time was showing Job Well Done. This log graphic seems to show a healthy mix of viewers. There were none of the weird, esoteric browsers in the records on the day this happened. The most popular browsers and all of the big OSes were represented. It appears that a thousand individuals in a tiny country, all with fairly standard computers, not phones, were online at NotZen.

Someone in Israel, it seemed, could recommend a story and generate a thousand readers. And for Israel, that turned out to be only the beginning.

But first, AdSense and AdWords would produce another change in the attention of aggregation sites. 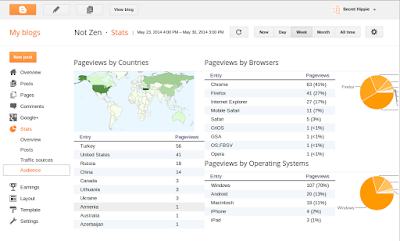 In May 2014, the site received Google approval to use AdSense. Going through the process felt weird. Google makes almost all of its money from ads. You’d think the company would be eager to have sites sign up.

On the surface, that’s the case. But underneath the campaign for ads, there is a bot that automatically approves sites. Until I applied, that bot hadn’t looked at the NotZen site. When, on my request, it did scroll through the homepage, it decided that NotZen was not a real site. The articles didn’t have enough text structured in the right form.

I had to appeal to a human. When I got through to one, fortunately, the human agreed that the bot wasn’t able to make sense of stories with dialogue. The Google employee allowed AdSense on NotZen. It changed the site.

Some of the change was for the worse – product ads, awkwardly placed for viewing by non-materialistic people. But along with the ads came the presence of different referring engines. One of those engines resided in Turkey.

When Turkey started sending readers to NotZen, the site got a spike in AdSense earnings. Whatever Google was doing there, it was working. The Turkish readers were clicking on ads alongside the stories. That seemed so unlikely that I blamed it on smartphones. I figured the Turks were accidentally clicking ads.

Later, my wife thought of another possible reason: readers in Turkey saw different ads than readers in the U.S. Maybe they were relevant. Maybe they even got referred to NotZen stories in a way that made sense. 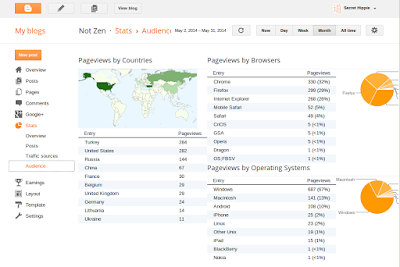 In May 2014, Turkey readership actually passed the U.S. for the month. Also, I saw that someone there was still using a Nokia phone. 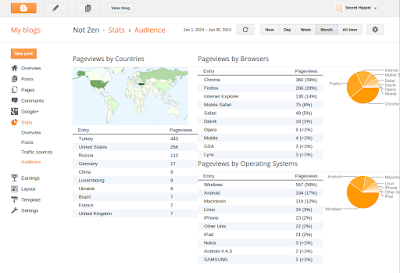 The trend continued in June. The log summaries made it appear that Turkish citizens owned plenty of Android phones and Windows computers but not a whole lot of Apple products. It seemed believable.

Also in June, the Dalvik browser made an appearance but that’s just another way of saying it was Firefox starting up within Android, probably. (Dalvik was an old Android virtual machine. A web browser running in it gave two identification strings and Blogspot didn’t understand that yet.)

Likewise, the GSA browser appeared in the logs because someone visited the site with a Google Search Appliance. In a way, I’m surprised there aren’t more entries for like these. 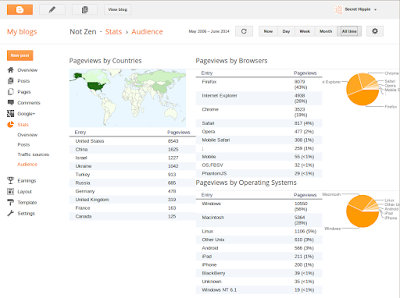 By the end of June 2014, Israel rose to third place in the overall readership. About eighty percent of their readers total, though, probably only read a single story. The Ukrainians had visited more steadily. Sometimes they’d browsed as few hundred people basically at the same time, sometimes as just a few dozen.

Although the Ukrainians, Russians, Chinese, and Americans seemed to be attracted to stories about love and peace, the Turkish readers, in contrast, seemed interested in stories about transcendence. That seems like a good thing to me, personally. 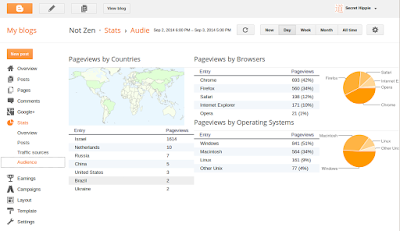 In September, Israeli readers noticed a second story. This one was Thoughtless Competition. As before, the Israelis browsed to the main page of the blog, not to the dedicated story link.

It seemed to be an emerging pattern. Someone decided they liked the current entry on NotZen, recommended it, and sent the homepage link to others, who actually read it.

Whoever that person was, they had been influential again. This time, they’d brought in over fifteen hundred readers at once. There was no spike in referring sites. The lack of an obvious source made it look personal, maybe a method as simple as a link sent out in an email newsletter. 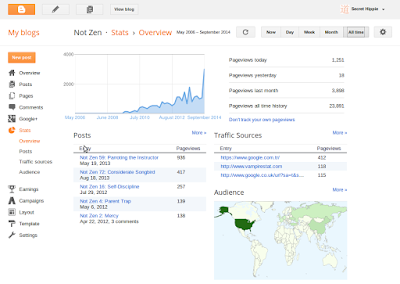 In September of 2014, the NotZen site saw over 3,800 readers in a month for the first time. The surge came thanks in part to Israel, again, although it also came from the U.S., Ukraine, Russia, and China. 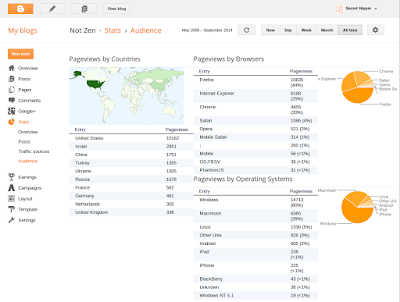 Eight of the top nine NotZen audiences turned out not to be from English speaking countries. Their citizens might read English some and they might use translation services. Mostly, I think those eight countries all have traditions of education and of reading for pleasure. It seems to be the most likely source of the readership differences. 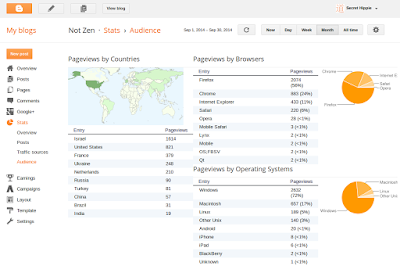 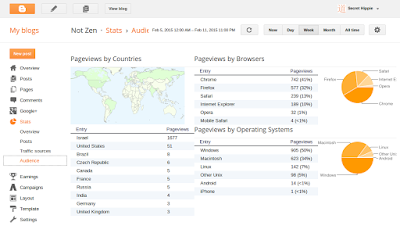 In February of 2015, readers in Israel discovered Immunity. It’s a parable that deals, in part, with deliberate ignorance and its consequences.

It’s true that some folks love to argue for the sake of appearing smart. Behaviors like that, coupled with lack of attention to practical details (for instance, not understanding that an ice maker needs a water line), lead to a sort of popular disdain for intellectuals.

The consequences of deliberate ignorance as an emotional response, though, are pretty severe. The failure to understand the science behind our homes, our tools, and our medicines affects anti-intellectuals and their families, friends, and neighbors. There’s a social aspect of deliberate ignorance that can make it irresponsible to let it resolve itself.

At the time I wrote Immunity, there had been a few outbreaks of old, nearly-forgotten diseases in the U.S. It seemed clear to me that, if the American anti-vaccination trend continued, more outbreaks would come. I picked an eradicated disease and decided to use it for my explanation.

Thiomersal, the other main technical key to the story, has been removed from U.S. vaccines. That probably wasn’t a good move or at least not a necessary one. It doesn’t seem to break down in the human body; there’s no sign that it does harm except to molds and bacteria; and its replacements are also preservatives and have similar but less studied properties.

If preservatives do damage, it’s likely to be because they are weakly antibiotic. They influence our personal biomes. If preservative compounds are causing harm, they’re doing it in a widespread fashion – in our foods, cosmetics, paints, and wooden furniture. Vaccines might be the least likely way to encounter a preservative. 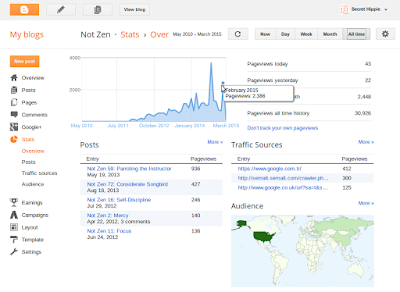 I’d gotten used to the graph growing in a regular fashion. In the spring of 2015, though, I could see that Israel had skewed the readership trends again. 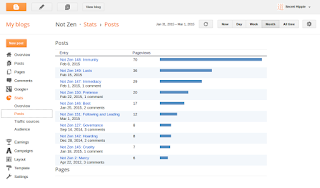 This is what happened when Israel liked Immunity. Previously, the Israelis had only browsed to the main page. This time, some of them went to the dedicated story link. Some may have even looked at other stories. 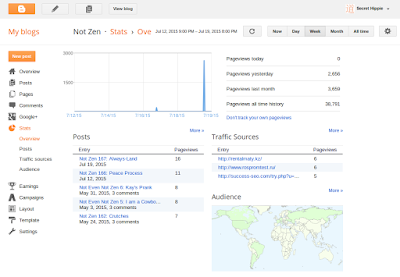 This bump in the chart appears to be a reaction to Always Land in July 2015. The Peace Process story might have had some appeal, too. By this time, the influencer in Israel, whoever or whatever that is, could apparently bring over two thousand six hundred folks to the site in just one day. This is for a small and until that day, unknown story, after all.

Next: NotZen Continues
Posted by Secret Hippie at 5:30 AM