Although the blog site never had links to Chinese social media (because I would have had to know the language to do that), somehow Chinese readers found the stories. After eight months, China had become the number two country in NotZen readership. 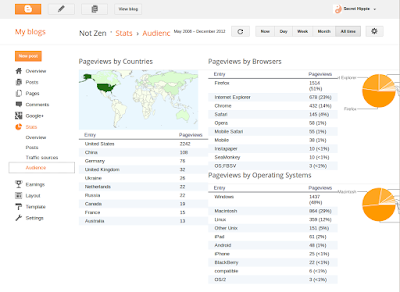 Naturally, at this point it was a distant second. The surprise was that China appeared at all. 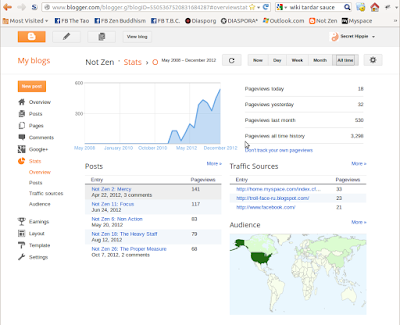 Around the same time, two stories, Mercy and Focus, seemed to be drawing more attention than the others. As I looked through the logs, I saw that a third story, The Heavy Staff, had been translated into French.

I traced down the French version after getting curious about a referring site. The referring site ended up being another blog - in French. That writer, who lived in Quebec, had translated the story and had also politely linked back to the original. Most other folks aren’t so polite. If the same thing has been done at other times, I’ll never know. 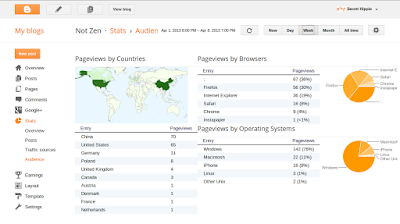 By April of 2013, China overtook the United States on a weekly readership basis. I think that I saved this screen due to a ‘China again, WTF?’ reaction. The site also started averaging a couple hundred readers per week. A significant portion of them came from out of the country.

The Chinese web browsers seemed not to identify themselves in ways that Blogspot could parse. That’s why the browser named “;” makes an appearance. There’s more of that than anything else.

Later, the “;” entries disappeared. I think that Blogspot learned to translate the Chinese. 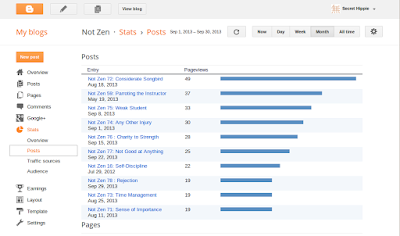 Individual stories started making comebacks in readership. I wasn’t always clear on why. It might have come from someone liking it, posting a link to it, and finally the link getting noticed. Whatever the process was, it took time to happen.

In this log entry, the older stories getting readers were Parroting the Instructor and Self-Discipline. I thought I had a clue about the first one. It was due to a particularly influential person.

Regardless of the trending stories and referring sites, readership from mainland China faded. I was never sure of the reasons. The United States finished on top in the logs again, week after week, even though the landscape of countries and technology kept shifting underneath. 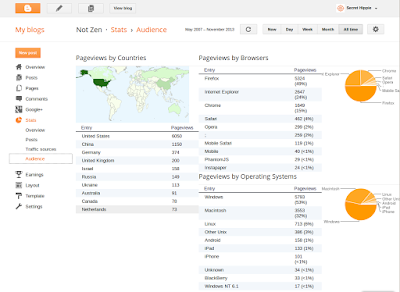 Although readership in China seemed to fade - due to lack of interest or to the Great Firewall or to a search engine grabbing the page contents and re-packaging them in Chinese - other countries outside of the U.S. started to climb. Israel made an appearance. Russia and the Ukraine showed up.

In November 2013, despite a lack of Chinese browsers, NotZen got more hits than ever from Baidu, the main Chinese search engine.

I’m not precisely sure if the Baidu search engine rose up to fill a need. If the notzen.net site got blocked by the Great Firewall of China how did Baidu get through? If the site wasn’t blocked, why did the Chinese browsers disappear? One logical answer would be that the few readers there ever were in China stopped browsing to notzen.net but that doesn’t match with the Baidu searches of the site trending upward. 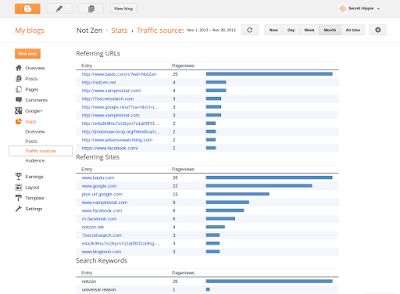 I don’t have the answers and, possibly, I don't even have the right questions.


Next: The Rise of the Influencers
Posted by Secret Hippie at 5:30 AM