Not Even Not Zen 208.5: Aesop's Progress - The Mystery of the Ukraine

Part 5: The Mystery of the Ukraine

The first week of January 2014 was the one in which the Ukraine passed the U.S. in readership. 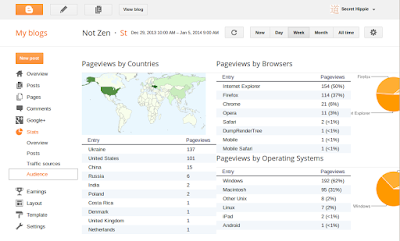 You might have expected a stronger Firefox and Chrome presence in the Ukraine. I’d have figured on seeing more Linux. Apparently, that wasn’t the way. 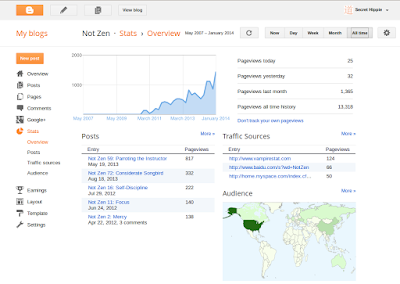 By the end of January 2014, the site hit a new high in monthly readers logged. There were more than 1,300 for the month. Of course, as an acquaintance pointed out, I had no assurance that this was the number of people actually reading all the way through a story.

The number of real people seeing each tale could have been greater, due to aggregator sites skimming off the text and re-publishing it as their own. It could have been less, too, because the same sort of web robots could generate hits in the logs while doing nothing else.

Since there’s not much I could do to get a more accurate sense of readership, I decided I had to accept the log numbers. The bot hits appeared to be a small fraction of the total. Plus, if each aggregator hit led to one extra, real person reading a story off-site, then the Blogspot totals would be accurate.

At this point, in a very short period of time, the Ukraine had risen from a tiny presence to third place in all time readers. 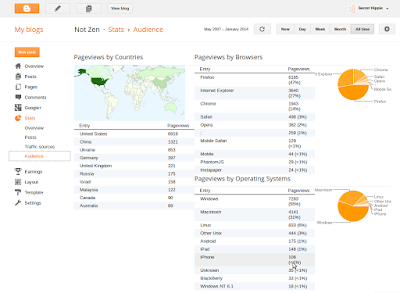 My sense of the Ukrainian readers was that, however they found out about NotZen stories, they were most attracted to those about love, peace, and friendship.

I remember noticing the pattern and discussing it with a friend, Sharon. For reasons that could be seen as Buddhist, I didn’t like it. Stories that are emotionally difficult are often more worthwhile than those with a happy resolution. The pattern of bumps in readership was apparent, though, and I flirted with the idea of playing to it.

At the core, that’s not what the stories are for, so the concept was impossible to execute. As you have probably seen, not all of these stories are friendly ones. They’re what they needed to be at the time.

The story that appeared just before June 30 was Tribes. I can see how that one might have appealed in the Ukraine at the time. 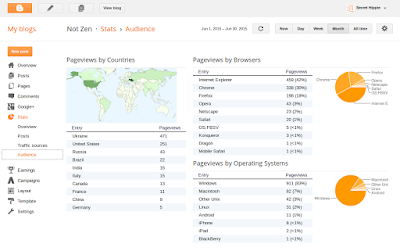 Next: The Israeli Influencer