Robert Gallagher, Wake
Remembrance as a Teacher - Buying In
The first few years as a teacher are usually tough. But by the time my father started in Montgomery County, he had six years of experience. After a year on the faculty at Northwood High, they offered him the math resource teacher position, equivalent to being the dean.

"Well, no one else wanted it," he told other grown-ups when I was a child. "I think they offered it to everybody before me. It's extra work. And the extra pay isn't much, a lot less than my hourly rate. But it's not so bad. My principal asked me to do it. The type of work suits me. I get a budget. I get to make the class schedules. If things work out, I give myself classes I want to teach. Even if things don't work out, I can make sure I get a class that's fun."

This was probably the year that he started hiring minority teachers to get them into the county system.

"I found that I had to go back to the University of Maryland," he told me later. "Math was just something I hadn't studied much. Suddenly, I was teaching it."

By the time I was aware of him as a teacher, around 1971, I could tell that he was good. It was a strange realization. Even in elementary school, you get a sense for the good teachers wherever you meet them. You notice how everyone reacts to them. I could see how his students got excited by his ideas. They liked to talk with him. The other teachers found him intriguing. 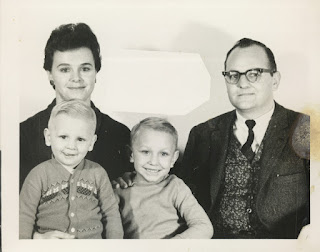 It was weird, as a child, to realize that he was very good at what he did.

He was starting to realize it, too. Although he was the head of the math department, he taught psychology, philosophy, and Russian language classes. He enjoyed himself enough that he studied the math for the teacher retirement system like he was going to spend his career in the classroom. He found that it made sense to "buy in" his years as a federal teacher for the army. So he did.

Besides heading his department, teaching other subjects, and buying extra seniority, he allowed other teachers to nominate him as their union representative.

"What's wrong with these people?" he asked about the union. The union job meant extra work, too. He had to go to teacher conventions in summer. He engaged in unpaid battles with county or state administrators. That much, he'd expected. But he had to fight battles within the union, too, and those were the ones that dispirited him. He didn't mind the struggle for better work conditions but he felt that the petty fights over prestige within the union or even within the teaching system were a waste of time.

In two years, he convinced another teacher to take the union representative job. My father settled back into teaching four subjects. That was enough.
Posted by Secret Hippie at 5:30 AM