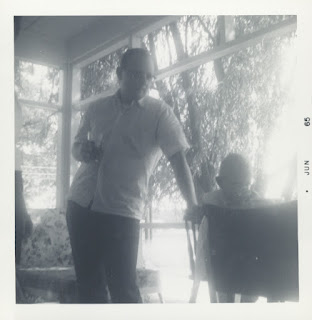 Robert Gallagher, WakeRemembrance as a Father: Parenting in the Neighborhood
After we returned to the United States, my parents held cocktail parties for their block in College Park. By the time I was eight, they had learned their lesson and stopped hosting them. Neither of them drank. The parties introduced them to the neighborhood but otherwise, didn't do them much good other than letting them discover that a few of the neighbors drank to excess and most of them disagreed with our family politics.
One night, a woman with short, light brown hair who had appeared at our parties burst through our front door and screamed, "He's going to kill me." She rushed down the stairs and out through the back. After her, through the still-open door, ran her husband with an axe. He roared after her, almost stumbling and stabbing himself with the axe blade as he bounded down the carpeted stairs.
Then she circled around. They ran through a second time. At that point, my father had the sense to shut and lock the front door. He did the same to the back door although my mother worried aloud about the woman and whether we could shelter her somehow. She belonged to the heavy-drinking, conservative neighbors in the house behind us. Fortunately, she escaped that night and returned to her husband the next morning to make him breakfast.
That wasn't an unusual incident for the couple. The neighbors in back of us drank and fought about two days out of three. So did other couples on the block. We saw our share of their conflicts. In retrospect, I understand that our little development on Patricia Court and Mezzerot Road housed a mix of academics in single-family homes, yet also it gave homes to mechanics, plumbers, and electricians, and then a few folks who would have to be called nearly-broke although they had somehow afforded a house alongside everyone else. That was a major difference in those days, the fact that a family on a single disability income could own a home or at least a mortgage with reasonable terms. 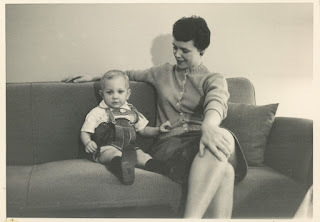 Another difference of the age is how the adults in the neighborhood shared their child-raising duties. Some of them had permission to administer corporal punishments. Others, really all of them, were expected to rat out misbehavior in children when it happened, which was nearly every day.
Lots of people have written about this so I'll only touch upon the wrinkle that mostly is not addressed. My parents were liberal (pushing for civil rights, supporting women in the workplace, and fighting the war on poverty). Most of the neighborhood was not. That led to some of the adults in the neighborhood trying to raise me with their values. They explained their theories on race, which they felt were more accurate than my parents' naive beliefs.
This is hard for people to picture nowadays. Some adults in the neighborhood pulled me aside although I was a boy of six, seven, or eight years old, to explain that I was black (because I was Irish) or low-white (again, Irish) or that Italians were black.
One of these was the man who had entertained me at Halloween by frying up a pan of spare change and throwing the contents into the street. Kids rushed to pick up the change and burned their fingers. Within about twenty seconds, though, most of the children realized the right thing to do was stomp on the coins you wanted. If you waited half a minute, they would cool down. For the younger ones, that meant the big kids couldn't steal your change. It was a pretty fair game. The biggest kids stomped on the quarters. But the younger ones got dimes and nickels. Toddlers scooped up warm pennies.
The other adults in the neighborhood made that fellow stop his trick after a few years. In retrospect, it was probably the wrong move. Not only did no one get seriously hurt but all of the kids learned to be clever. It was not a bad lesson. The same man, though, was one of those who had to explain his ideas about races. He ranked groups, top to bottom, and kept up a criticism of his own ranking system as he explained it because I did not contribute to conversation. I was waiting, as most kids did, for the adults to finish rambling and give me permission to leave. His ranking ideas were a lot like the others and so, at the top, were the English. Following them in order were the Dutch, Swedish, Germans ("They would be higher but they keep on losing wars"), French, Spanish, low whites, Armenians, colored people, and Jews - these last four being an indistinguishable mass to him. This was how a lot of people thought and, although I'm glad I don't hear such rankings nowadays, I'm not sure that our loss memory about it is good. Our neighborhood, and many others, felt divided along the ethnic lines of Europe. I suspect that the divisions are with us still while the causes have been forgotten.
On top of this, one of the mothers on the block explained that mixed marriage was a sin. She meant Irish and Italians. That was the type of mixed marriage that gripped our neighborhood. At least three adults lectured me about how wrong it was and how the race-mixing would end in tragedy.
One time, an adult stopped me to explain something and I waited, not listening. I was thinking about snakes, then pennies, then frogs. My attention returned for a moment when I heard him say, "Well, you're basically all right because of your mom. You're half English."
At that moment, my brain achieved something it didn't do often back then: it replayed the previous monologue where the grownup had explained how terrible it was to be Irish. He had told me that my father was Irish. Burning with curiosity, I made a mental note to tell my father.
When I got home, I found my parents in the kitchen. I managed to relay to my father the exact words that had been said about the Irish. (I don't remember them now.) Then I watched as his pale skin slowly turned light pink and finally hot pink. He couldn't get any words out. He stomped around the kitchen.
When he regained his composure, he said, "Do you know what those words mean? Never mind." He waved off the idea looking at my blank expression. "Don't ever talk to that man again."
Scenes like this, I think, are why child-raising by neighbors was bound to die out. 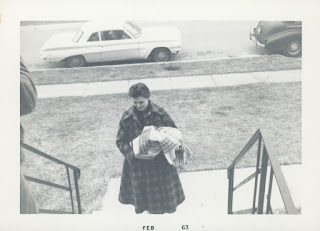