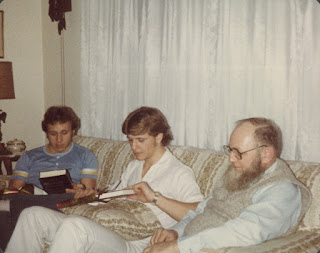 Parenting through College
When I was seventeen, I left home. My father supported the move. When he was that age, he'd left, too.

At that point, I didn't want to go to college. I just wanted out of the current situation. My parents wanted me to continue with school. So in return for their permission to move, legally necessary as they pointed out, I agreed to work my way through the University of Maryland from a basement room I rented near campus.

Thanks to a couple years of lifeguarding, I had enough saved for a semester of classes and books. My plan was to work full time during the semester in order to make enough for the next one. My father thought that wouldn't work out so his plan was to keep offering me money. Since it came with strings attached, I kept turning him down even though he was right. Holding jobs in fast food restaurants and ignoring my classes didn't make for a good college experience.

I spent money foolishly, drank too much, and filed my paperwork incorrectly when dropping and adding classes. I managed to spend my bank account down to five dollars after paying bills, only to have the restaurant fail to distribute paychecks, while my manager dropped most of my shifts that week, a set of circumstances that meant no food for four days.

Although near the deadline I scraped enough together for the second semester, I forgot to budget for textbooks. So after all my insistence that I wouldn't accept money, I had to take fifty dollars from my father so I could go to class.

During my second semester, I dropped theatre, dropped math, took ethics, tried French, and started writing and singing. For the first time, I decided to write a novel. Sometimes I wrote only 500 words per day in it. Sometimes I did my schoolwork instead. But I started building up the right habits to continue.

By summer, my father got me to agree to come back home under a "his rules / no rules" situation where he said I should live by his family rules and I agreed that I would move back and live by no rules whatsoever. We were back to where we were before except I was eighteen. We both agreed that I should leave by the end of the summer, when my job ended.

Maybe because we agreed, it was something we couldn't do.

Every morning in the summer, I got up to coach a swim team and manage pools. I wrote late at night, every night, 1,000 words per session. Most of the words were awful. Sometimes I worked at the kitchen table on a loose-leaf notebook with a series of ball point pens, alternating colors each session so that I didn't cheat myself.

My father would pass by and look over my shoulder. After a few weeks, he said, "You're building up some pages."

A few weeks more and he switched to, "Let me have a look."

"But you are actually writing it."

"What about that girl you keep bringing over?"

The end result of the writing was about half of a novel but a lot of motivation. My summer jobs came to an end and I hadn't thought of anything beyond the novel. My parents had pushed me into applying for colleges but I was only partly interested, so I hadn't done much except thumb through the guides with a sense of despair.

"You don't have to get a degree," was my father's argument for continuing to look at schools. "Just being in the classes is good for your writing."

To me, that was an effective line of reasoning. One of the classes I'd liked most in the previous semester was 'Elective Writing.' My father and I came to an agreement that surprised the rest of the family. I would keep on living with them and writing every day and the only price I would have to pay would be applying to at least two colleges with a goal to attend by the spring semester

My mother found a college where I could design my own major. My father seized on it as being exactly what I said I wanted. And despite the fact that they were for it, I was kind of interested.

The school was a little, mostly-unknown place in Massachusetts called Hampshire College.
Posted by Secret Hippie at 5:30 AM