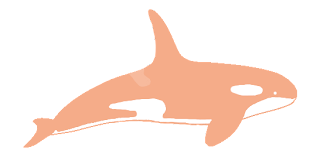 Why he couldn't roam with the wilder orcas who lived solitary lives? He'd seen them from a distance.  He envied their freedom.

One day, a female elder called the clan together for a meeting. The young bull decided not to attend but he wasn't given a choice. Other orcas gathered around him and talked about their travels. It was a subject of conversation he found tedious. As a junior member, he struggled to be polite with the males and females who remembered and debated. He settled for being silent. Even that was a struggle.

From a distance, his grandmother watched.

A moment after he answered a question about where to dive for squid with, "How would I know?  We haven't dived for squid in months," his grandmother swam up to him.

She whispered so that only he could hear, “From birth to death, it's just this.”

His spirits sank. His grandmother was strong and wise. She had seen into his spirit, right to what he was afraid of most: that his life would always be like this. She confirmed it. This was life. This was what it was. All day long and into the evening, he despaired about her words.

He spent a few days saying goodbye to the pod and to each of its members. He'd made up his mind to leave. He'd go to the deepest ocean, perhaps to sink to the bottom, stay, and die. He listened for the sounds made by the solitary orcas to the north, denizens of the deeper seas. The same thing was true for them, too: this was all there was, just this. From birth to death, existence was what was in him and around him. When he lived alone, there would be even less around him and he prepared for that.

There would be octopuses to see in the shallows and in the sea bottoms. The orca spent some time diving to them to study how they lived. They hunted crabs, he noticed after a few dives. He scooped up one of the crabs and ate it when he got hungry.

He explored the schools of fish, large and small. Sometimes they fled from him but sometimes not. He swam up to the land animals that ventured out to sea in boats. They usually tried to keep their distance but a few got close enough for him to get a good look, one on four legs, others on two. As the pod traveled south in the next week, he spent several days observing a strip of sand and ice on which a few polar bears roamed. Bears competed with orcas for their favorite food, seals. He was surprised to find that he held a grudging respect for bears. As swimmers, they were no match for seals and yet they hunted. They succeeded. They lived.

In time, the orca came to respect even the seals and walruses. He'd thought they were annoying before, especially the walruses, but he observed that some of them were tough, some were fast, and some were clever, much as the members of his pod were.

To his surprise, he began to find the pod meetings interesting. The others of his clan were no brighter than they had been before. They were no less full of silly talk about the weather or the fish or the kelp. But he understood that these things mattered to them and he felt more generous of their concerns. Other orcas did not often have grand thoughts about the purpose of life, the differences between males and females, the cultures of other orcas, or the ways of creatures that they hardly ever saw, such as dolphins, pilot whales, or deep sea squid. He felt that those creatures did have their own cultures, however primitive, but even his grandmother held few opinions about them.

He learned to relax during the pod meetings and listen for the observations made by the other orcas. He took their wisdom as he found it. Sometimes they surprised him and he learned from those who he'd disdained.

He never got around to leaving. He watched the lone orcas from a distance and realized they rarely vocalized except in anger or in hunting. Swimming alone would mean living without the company of those others, who were solitary by nature. It would be a tedious existence, nearly purposeless without others to care for, and anyway, from birth to death, this was all that there was. All that surrounded him was beautiful like the squids that flashed in the deeps and terrible like the bull sperm whales that hunted giant creatures where orcas could not go. The orcas had their place, though, hunting the whales in their turn.

Existence was all those things at once. It was also all those things he could not understand from tides to deep currents, from storms to quakes, from swells to waterspouts. He knew he did not truly understand the bright sun or the stars at night or any other lives, small or great. Even before his birth and after his death, he was a part of an overwhelming, unknowable everything. Each mundane act and every miraculous effort played its part. Ordinary breaths of air and events like flocks of seabirds falling from the sky were equal. The pod meetings, too, played their part in how things were.

Years passed and his grandmother reached nearly ninety years before she was injured defending one of her great-grandchildren from another pod of orcas. As their group asserted its territorial claim over the bay, they watched their injured matriarch. For a day or two, she hung on but her wounds festered. She grew feverish. It became clear that she was going to die. She rested near the surface and watched the calves playing not far away from her.

Her grandson, now one of the oldest males in the pod, floated up to the surface next to his grandmother and kept her company. She talked about the sun and its warmth. She wondered about birds and where they go. She reminded him that “between birth and death, there is only this.”

“Grandmother,” he replied. “Before birth and after death, I think it's the same, just this.”

“You shine in the sun,” she told him. They nuzzled and watched the world for a few hours more until his grandmother was dead. Her body began to sink.

The grandson paid no more heed. He blasted a great call to the others. He gathered them to a pod meeting. They discussed plans for travel eastward into the bay to hunt the great schools of fish they'd followed and then they left.
Posted by Secret Hippie at 5:30 AM