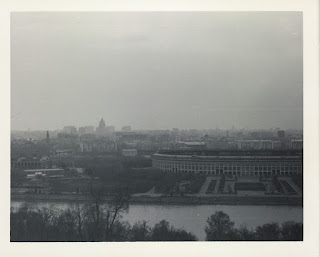 As a ten year old on a twelve hour flight that left me, after a three our bus ride, eight hours off my usual sleep schedule, I don't think it's remarkable that I was only conscious part-time during the first days of the trip. The weirdness of my body trying to sleep in the afternoon, my motion sickness on the bus, and the loudness of the teenagers around me made parts of the tour impossible. I couldn't stare at a second or third Lenin statue in a row without wobbling.

Technically, my father and the high school students kept me awake. That was only my body, though. My brain went on its own dream-addled trip full of golden hands, concrete slabs, and cloudless skies.

Once, on the first day on our tour, I came alert long enough for the most beautiful girl on the bus to tell me I could sleep on her lap.

"Your hair is so soft," she said as she patted my head. A moment later, she turned to the girl next to her. "Did you feel this little boy's hair? You should feel it."

A couple of her friends joined in, messing and combing my hair. My unconscious and conscious selves got together for a moment and decided this was just fine. I snuggled in next to her. She smelled terrific. Later, in an extended moment of consciousness, she talked with me long enough to discover that I didn't know what the Mickey Mouse Club was - that it had gone off the air. I'd never seen it.

"How can you not know the club?" she exclaimed. She led her friends in singing the theme song, a surrealistic joy in my state of mind. One of the young men in the seat across from her made a comment about Annette Funicello that I didn't understand. I still don't really remember the words but I understand now why the mention got a reaction from the other teenagers. At the time, it was just another mystery. Older kids are aliens when you're ten. Teens seemed far beyond my comprehension, more so than adults. 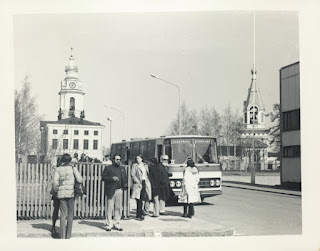 When I did start to wake up towards the end of the second day, I noticed how communism in practice was different than in the propaganda. We got a tour of the Communist Party headquarters in Leningrad. The party leaders occupied the palace of a former Tzar. We got to see ordinary people standing in lines everywhere for fruit or bread. Not the party leaders. They had everything they wanted.

I had read Animal Farm by George Orwell in the year before. (My father's library was an odd place in which to grow up. Animal Farm was one of the shortest, easiest volumes in it.) This felt very much like the communal farm gone wrong. At one point, I scowled about Communist Party leaders getting into a limousine. My father, standing nearby me as usual, seemed to know exactly what I was thinking.

"All animals are equal," he said, "but some are more equal than others.”

"They're doing it right in front of us!" I stomped my foot like Snowball outraged by the betrayal of the revolution. The party leaders weren't even embarrassed by their hypocrisy.

"That was something I was glad you could see for yourself," he told me later. 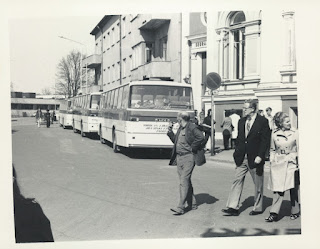