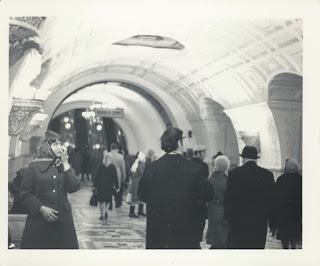 The itinerary of our Soviet Union trip began in Leningrad, I think, but my memory is of it is poor. I was ten and suffering from eight hours of jet lag. At any rate, I think we took the train twice. On the map, that makes sense if we took the bus from the border to Leningrad, rode the train south to Moscow, and took a train back to Leningrad.

The first train ride was the one in which I discovered tea.

That may sound strange because my grandmother served me unsweetened tea every day, sometimes for months on end. I never liked it. That was partly because I compared it to sugary cola. The tea tasted bitter by contrast. Even if I added sugar, it remained bland. Sometimes, on a hot evening after chasing fireflies for two hours, tea seemed really good anyway, but only for a moment. The brew in Russia tasted different and I had no idea why.

When I returned to the United States, I tried to figure it out. I read the labels on the tea. I found that my mother used instant tea mix, which in some ways wasn't much like tea at all. My grandmother brewed hers from Lipton tea bags that said 'orange pekoe.' That was the bitter, sour taste. Back on the train to Moscow, I drank from a cup that was hot. The liquid swirled darkly like smoke and tasted like a campfire you'd enjoy lying down in so that you could surround yourself with the smell. The service came with communist party sugar cubes. (Each cube was individually wrapped, either in red with a gold hammer and sickle, or in black with a red or gold star.) 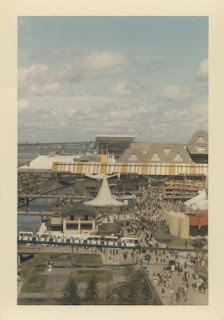 The first sip of the dark brew did it. I wanted more. As it turned out, I ordered tea at every restaurant on the tour. I didn't even need to do that. The Russians served tea on every time regardless of what I said. On a few occasions, the waiters seemed amused by how much I loved it.

Soviet food was never very good although we probably ate some of Russia's or Siberia's best produce at the time. The highlight, for me, was the shchi, which is cabbage soup. That came with nearly every meal and it varied from delightful to half-hearted but more often it was on the delightful side. I could trust it when I couldn't trust anything else, not the meat, the peas (seven per plate), not even the onions (once or twice cooked dark to try to hide spoilage).

My father, for his part, had expected bad food. But he hadn't expected to wait on lines for everything that wasn't part of the tour. He tried buying candies and ice cream. Each time, it was a struggle. Even when he was amused by the non-American-ness of it (gosh, here I am standing in a line out on the street to by a mystery item from a box), he couldn't help feeling bewildered.

The entertainment was equally foreign to him. The Soviets had almost no western-block tourists before us, so they reached deeply into their bag of tricks. We saw almost every State-approved, patriotic act there was. First, we listened to balalaika strummers; and they were virtuosos. After the next statue visit, we piled into a huge auditorium made for operas and watched the Soviet military kick dancing. To our hosts, the dance was clearly high art, as worthy of praise as paintings, poetry, symphonies, or ballet. Better, it gave glory to the revolution, as the dancers showed us their skills while in uniform.

Back and forth we went between museums or monuments and the performances. We saw a swimsuit girl with a hula hoop; she did acrobatics. We watched a magician with an assistant who handed him hula hoops. We went to the circus one evening, which had a high-wire act, trapeze artists who were easily my favorites of the tour, and a dancing bear with a hula hoop. Later, we saw lesser balalaika players, an amatuerish magician, and a pair of out-of-shape schoolgirls, again with hula hoops.

"I guess they really like hula hoops," my father said eventually.