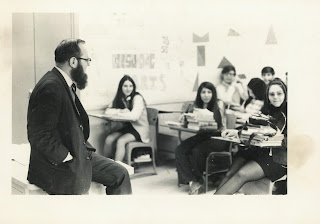 My father must have had a hundred jokes. That sounds good but actually there are three hundred sixty five days in a year. And he told more than one joke per day.

When I was ten, I spent a lot of time in the math lab and the teacher's lounge at Northwood High School, where my father worked. He was the Math Resource Teacher by that time. The position gave him a bit of extra money and responsibility. He got to plan the math class schedules, hire teachers, and assign them to classes.

One day, a medium-tall black man walked into the lab. He had on a suit jacket and glasses. He asked me who I was and then ignored me while I played. When my dad walked in a few minutes later, the man greeted my father with a big handshake and a smile.

"I got the transfer," he said. "I'm already teaching history."

"Way better than math." They both got a big laugh out of that.

I asked why the man didn't like math. At ten, I thought it was fine enough. My father responded with some sort of joke. He would never have explained it, I guess, not to a ten year old. It was the black man who spoke up.

"No one in the county would hire me," he said. "But a friend of mine told me about your dad. Your dad got me in the system. I had to teach math for a year. But I always wanted to be a history teacher. Once I was in the system, I transferred. See, I could even transfer to where they didn't want me."

"They need history teachers there, too," said my dad.

"Your father is doing a good thing."

By this point, I sensed an adult-world sort of mystery. There was something going on that they hadn't explained. I kept asking. It took them a few minutes more to fully reveal my father's method. It wasn't something my father would have told me on his own. But the other man thought it was important. He insisted. In fact, he did most of the telling.

At the time, the county teacher hiring forms went through one woman in the central office. It wasn't that this woman controlled the decisions, really, just that the paperwork all went through her. She refused to process the hiring of black teachers for any place that she didn't consider a black school. That meant there were hardly any black teachers hired each year, sometimes none.

My father didn't have the ability to hire black History teachers or English teachers or foreign language teachers. However, the county had made an exception for math teachers. As usual, no school could get enough of them. So the local principals and math resource teachers were allowed to hire candidates 'on the spot.' My father's principal had given him the freedom to hire anyone who he wanted. The word got out. Robert Gallagher was hiring blacks at Northwood High School.

Yes, you had to teach math in your first year. After that, you were expected to transfer out to the job you really wanted. Then my father would hire another black teacher and the cycle would start again. It was their way of beating the county hiring system, which was one that wasn't admitting more than the minimum quota of African Americans.

It wasn't a major rebellion on my father's part, I think. He felt that he was doing the right thing and it was nothing more than that. He never said anything more about it aside from that one conversation. He was committing a series of small acts that, by necessity, flew under the radar of everyone except his principal and a few fellow teachers. For a while, one of those teachers he hired, Regina Skyles, did socialize with us and we got to know her family until she transferred. Other than that, the teachers remained co-workers who we, in the rest of the family, never thought about.

For less than a decade in the late sixties and early seventies, my father found it necessary to trick the system a little. Tricks like those were his strength. And mostly, he did them with a laugh.

#
An addendum:
I think my father and his principal pushed through as many black math teachers as they could. That meant having enough math classes to occupy them.
It’s hard to schedule for extra math teachers if you don’t have a need for them. They had to go an extra step to create an extra need.
In those years, my father taught psychology, philosophy, and Russian classes. I think that in most of those years he only taught one or two math classes. That was his course load as the math resource teacher: pretty much anything but math. Surely it must’ve seemed unusual. It also meant that other parts of the school were chipping in for the civil rights effort whether they wanted to or not. There must have been some risk of complaints. Part of the principal's role in the scheme must’ve been to quell those complaints. Quickly, with emphasis.
Posted by Secret Hippie at 5:30 AM