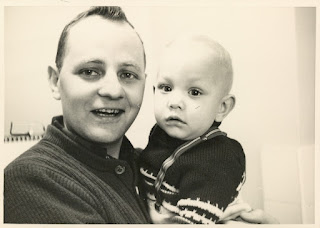 Recognition
When I was three and living in Germany, my parents insisted that we start meals with a prayer. Often I led the prayer. My father listened to me in my sing-song voice for about half a year of our occasional ritual before he figured out that my final words at the end of each prayer were, "come in." Apparently, I couldn't make any other sense out of what grown-ups were saying at the end.
He tried to correct me. He told me it was "amen" even I though, at the age of three, that didn't make any sense. My mother pointed out that "come in" was nice. She actually defended it! That let to my father regarding the whole situation, including my mother's rationalization, as funny. So he did what he did best. He told that story about me for the next fifty-one years.
He told some good stories. He told a lot, good, bad, and just plain interesting.  He wasn't shy about re-telling his classics.
Now, an old friend of mine once said that I showed a great strength for misrepresenting the classics. In light of that strength, I will now misrepresent you The Book of Common Prayer, verse 1928, and an inappropriate passage from the Book of John.
We have in our hands our merciful father and we commit his ashes to this cigar box in the spirit of his Scots-Irish sensibilities, earth to earth, cigar ashes to ashes, wood chipper to mulch.
Let not your heart be troubled.
In my father's house, there are many newspapers. If it were not so, we would not be such a long time cleaning up. Whatever comes next, we are preparing.
We will go and prepare a place for all and we will receive you all. Wherever we are, you may be also. And if you have known us, you have known our father also, even if you have never met him. If you have seen us, you have seen him. Do you not believe that we are in our father and our father lives in us? Our father dwells in our bodies. At times, he speaks from our mouths and we do his works.
Verily, verily, I say unto you, the works that we do, he does also. The better we are, the more to his glory.
Our father, in this cigar box, hallowed be thy name. We've read your will. Your will be done. Here, as it hardly ever was in life. You gave to us our daily bread. We forgave one another our trespasses. We mostly forgave those who trespassed against us. You didn't quite resist temptation. But you delivered us to where we are now, in a good place. Come in.
Posted by Secret Hippie at 5:30 AM