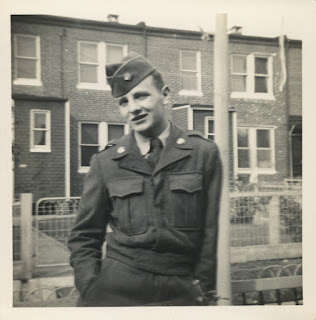 Although the signal corps continued strong for months, one of their captains rotated out. The army brought in a replacement. The new man called the other officers 'eggheads.' He said the signal corps looked weak. He saw that the enlisted men didn't go on marches. No one did their morning calisthenics. Since the transcribers worked different shifts around the clock, they didn't meet together as a corps.

The new captain decided to change all of that. He re-instituted regular weapons training. He made the sergeants lead the troops in calisthenics. He took entire squads on marches.

"He thinks he's a fucking marine!" The older men in the corps complained.

"It's worse than that. Black Jack thinks we're all marines." Within a few days, they had assigned him a nickname. My father, still seventeen, thought it was pretty funny.

Even the officers, all of them specialists, were angered by how the captain treated them. They didn't know what to do about it, though, so all they did was complain to each other.

"He can't decode anything!" a lieutenant said and then added the bad news that Black Jack had misplaced the previous captain's reference materials. Those were essential at times. But Black Jack hadn't understood them, so he had decided they were unnecessary. He might have burned them. "He doesn't even know what we do."

The captain started passing out demerits based on improperly worn uniforms, poorly made beds, towels left out to dry in the wrong place, and not using enough boot polish. He punished enlisted men immediately before their transcription shifts, so that more of them made mistakes that resulted in unreadable codes. He took the corps on a march together so that some of the men missed shifts. Others fell asleep during their transcription sessions.

The marches tired my father out more than anything. They could start at dawn and if you had just listened to coded radio all night, it didn't matter. You had to go. He watched the older men and learned from them. He reported to work on time. He turned in correct translations of the radio code signals he'd picked up although it was a struggle. 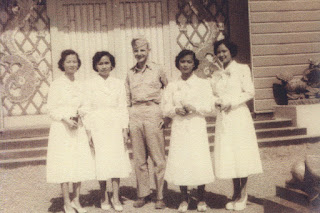 The junior officers appealed to the colonel about Black Jack hurting the signal corps. He told them to be patient. Black Jack, he thought, was doing what new captains did. Then the colonel called the captain into his office for a talk. Lieutenants and enlisted men put their ears to the wall. The colonel shouted a bit but nothing much came of it. Black Jack was quieter for a couple days. Soon, he returned to his usual tactics.

The privates, corporals, and sergeants started to retaliate against Black Jack's inspections. One of his favorite tricks during those was to have the men stand in parade formation. He'd walk along for a minute, turn, and snatch a rifle from a private's hands. If he could snatch it away, he would give a demerit for holding the gun too lightly.

After a few more parade inspections, the enlisted men saw it coming. One of them in the line ahead of my father clutched his gun. The captain struggled with it and had to resort to ordering the private to let go. He returned that rifle and turned to the next man. He gave the gun a firm yank, expecting resistance. The private let go so suddenly that Black Jack nearly bayoneted himself in the head. For my father, it was easy not to laugh. It would have meant demerits. But the event got funnier and funnier in memory as the enlisted men retold it forever after.

Black Jack stopped using that particular trick. But he kept penalizing the privates and interfering with their code transcriptions while not actually barring them from their jobs. The enlisted men wanted to go on strike but, of course, they were in the army. They couldn't. Any real attempt at a work stoppage would land them in the stockade.

Just hearing the men talk about it made my father nervous. Fortunately, most of the corps regarded him as a kid. He was definitely the youngest radioman and they didn't expect him to do anything except stay out of their way.

The soldiers started their resistance movement in the mess hall. Organizers among them passed out word about what to eat. Sometimes it was, "nobody eat the eggs." Each time an order came, it meant a bunch of something left over. It looked bad on company reports but it didn't seem to bother the captain. So the entire corps skipped lunch, my father too. The soldiers ate double at dinner to create shortages in the ingredients. Finally, an inspector happened by when the troops skipped a meal. He saw the leftover food get thrown out. He checked the books and saw the excessive waste.

The Inspector General called in the colonel, who called in the captain. They wanted to talk about the reasons the men would skip meals. Finally, the troops had succeeded in getting Black Jack into trouble. The problem was, it wasn't enough. 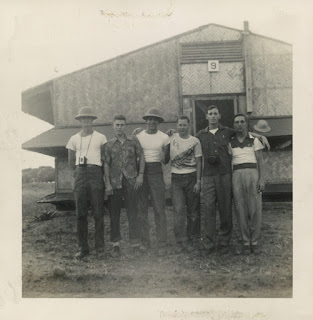