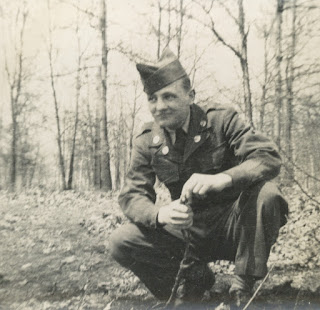 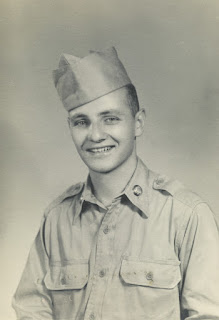 When my father sent American messages, he walked from the radio room down the hall to the next room. There, on a bench, sat a machine with five wheels. He used an algorithm supplied by his duty officer to decide how to start. It was always a calculation that began with the first five or ten letters of the plaintext message. Then he enciphered the message and transmitted it.

For deciphering duty, my father intercepted Chinese and Korean radio signals in which every part of the message came to him in five letter chunks. There seemed to be hardly any attempts by the enemy to hide their war communications. Their operators transmitted over a known range of bands. Radiomen of the 126th Signal Service Company took the captured transmissions to an officer who sat nearby.

Often, the officer could put my father's message through the machine, make a few adjustments, and decode the message on the spot. Then the lieutenant, since it was almost always a lieutenant, gave the decoded text to my father to enter in the daily log book.

When there was time, the officers would discuss cipher schemes with my father. During the early months of the Korean War, the lieutenants tried to elevate the skills of their enlisted troops. When the week was too busy or everyone was too tired, as happened more often after the arrival of Captain Black Jack, no one spoke. An enciphered message came in. A plain text message left for the logs and for overnight transmission to the headquarters in Washington, DC.

The overnight transmission was the main way that the U.S. military leadership knew about the Signal Corps. The radiomen on night duty enciphered the Korean messages with American codes and sent them to the relay station in the Philippines. Other radiomen re-transmitted them to California. Finally, at around four o'clock in the morning, the messages reached army headquarters.

He had continued, as a tough-minded captain, to drill the enlisted men as if they were front line troops. At one point when North Korean forces threatened to overrun the position of the 126th Signal Service Company, Black Jack told his men they would not be following the usual pack-up-and-run procedure.

"If those bastards come for us, we'll burn the code books and fight." The captain made the announcement on his own authority to his assembled soldiers. "We'll fight to the end."

"We only have rifles," hissed a corporeal.

"And you're no damned good with them," said a sergeant.

Late that night, the veteran enlisted men held an emergency session. Could they complain to the colonel? Would other officers impose sanity on Black Jack?

"Listen, Roberts, if the place gets overrun," an older enlisted man took my father aside. "Just stay away from the captain."

"You talk too much with the officers." He meant my father liked learning the cipher methods. "Stay away from them for a few days. If Black Jack tells us to get our rifles, you go get yours but don't come back."

"Wait until you're at the back of the line, get it? Don't get near Black Jack."

My father had just turned eighteen. He didn't understand what they were telling him. An older, more worldly private had to pull him aside later and explain.

"If Black Jack really tries to make us charge the Chinese tanks with our rifles, the sergeants are going to accidentally shoot the captain."

"The lieutenants, too, if they give us any grief about it. And then we're going to pack up the equipment and run just like we should."

As the front approached, the troops didn't see any sign of Black Jack giving up his resolve to fight. He marched his men. He drilled them with rifles. He ran scenarios for defense of the base. He forgot about the overnight block transmissions. For a few days, the radiomen working overtime sent them to Washington headquarters late. Then, after a long all-day march, the captain cancelled night shift. No radioman put in extra hours to send the batch of deciphered Korean messages. 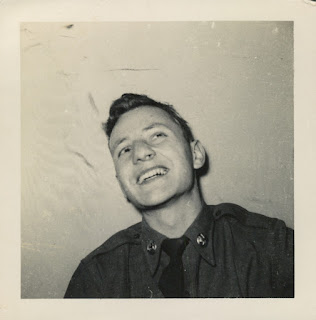 That was too much. Washington called California. California called Guam. Guam radioed the Philippines. The base colonel picked up the phone and swore to his superiors that it would never happen again. He called Black Jack into his office.
At long last, he shipped Black Jack out.
Posted by Secret Hippie at 5:30 AM