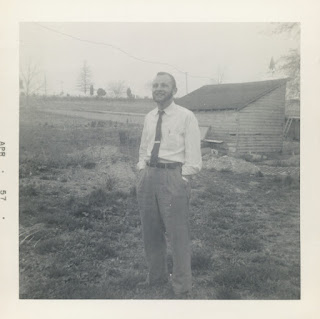 When they returned to Maryland in the fall of 1958, my father went to work for IBM. He was still taking classes at the university. My mother had at least a year and a half left to get her bachelor's degree. Under the circumstances, they needed roommates in their rented house.

One of their roommates was a woman named Valerie Solanas. She was a student who had tried to stab several men on campus in arguments with them, so she needed to move out of the dorms. She talked my parents into letting her have the upstairs room. However, Solanas got into fights with their guests.

My father warned one of them, Arno Wasserman, a fellow graduate student who lived a few houses down on Calvert Road. Arno stopped by once or twice per week to eat their food and chat.

"Help yourself," my father said. "But don't tease Valerie."

It was the wrong thing to say. A few weeks later, Arno met Valerie coming through the living room. He couldn't resist talking to her. It got political.

Teasingly, he asked her, "What, don't you think men are superior to women?"

Valerie spit on him. Then she turned and ran into the kitchen. Arno could see she was opening and closing drawers. She pulled out a carving knife. Suddenly, Arno realized that if he didn't go, he was going to get stabbed. He tried to bolt from the house but Solanis blocked him. She chased him around the ground floor a few times before he locked himself in a room and escaped out a window. Even on the street, she followed. Valerie chased Arno all the way to his house. He had to lock everything on his first floor. His own roommates were not amused.

Arno stayed friends with my parents. Thereafter, though, he met them for lunch at the student union. He never again visited them in their Calvert Street home.

Valerie never actually paid rent. She promised and promised. My parents finally had to ask her to leave. Valerie moved to California. She wrote a book, the SCUM Manifesto, which my father owned and I read from his library when I was an adolescent. Then, less than ten years after being their roommate, Valerie shot Andy Warhol. In her brief interactions with Warhol, she came to the opinion that he was sexist. What she did in response seems consistent with her character. In fact, after shooting Warhal, she turned the gun on another man. The gun jammed. Valerie walked out of the building, found a police officer, and gave herself up.

At that point, my parents stopped trying to keep up with Valerie.