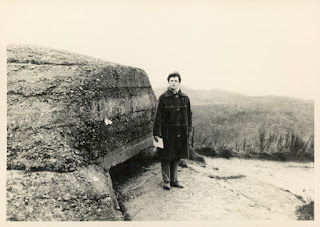 A Visit to Europe

In the summer of 1958, while still enrolled at the University of Maryland, my mother and father decided they should visit Europe. They were both working all-out for their degrees and my father had jobs besides but he quit them for the summer. They didn't have money for airplane tickets. Instead, they took a cargo freighter for forty bucks and brought their bicycles and backpacks as cargo. When they reached land, they traveled by bike and stayed in youth hostels for two dollars to ten dollars a night. If they couldn't find a hostel nearby, they camped for free.

"Bicycling made me fat," my father would tell me later, many times. What he meant was that his habits on a bike weren't sustainable when he stopped. He got in the habit of eating candy bars as he biked.

In Great Britain, my parents averaged between 40 and 90 miles per travel day. (And presumably my father ate a lot of candy bars.) They knew the mileages from their maps and the marked distances between youth hostels. They didn't consider the cycling to be difficult except for once. The 90 mile ride was their longest and it was through a cold and lonely stretch of Scotland. When they got to their hostel, which turned out to be unfriendly, they pretty much collapsed in the beds assigned to them. The worst part was bicycling most of the day through the rain. 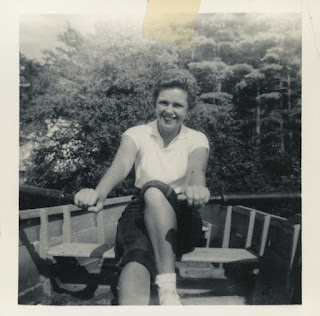 Despite the occasional unhelpful hostel keeper or shop owner, they found most people to be friendly no matter what the country or circumstance. There was always someone willing to talk, to advise them on the best or cheapest food and drink, or to hoist their bikes onto a flatbed and drive them for a while.

In Denmark, they tried hitchhiking and got a ride right away.
"I don't normally pick up hitchhikers," warned the truck driver. "No one does. But I noticed you are American."

He told them the little things he'd noticed about them that made them different. Those were the clothes, the Schwinn bicycles, a backpack patch with American style English on it. "Don't change," he advised. "No one likes our hitchhikers. But you, well, people like to have pity on Americans."

He went on to describe the various things that were wrong with all the various peoples and cultures of Europe and why he would (mostly) not give any of them a ride anywhere.

My parents logged their travels that summer, over 2,000 miles in total. They saw a score of different countries and cultures. What's more, biking together suited their marriage. Even though they were working hard and living cheaply, they were figuring out how to do it together.
Posted by Secret Hippie at 5:30 AM