Not Even Not Traveling 1: Oklahoma and Arkansas Vacation, July 2021 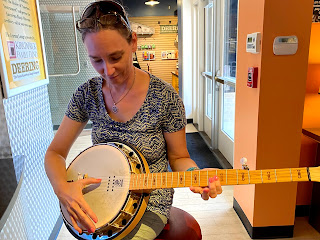 Background: Twenty years ago, I used write reviews of my vacation choices and email them as letters to friends. Then technology changed and I posted my travel reviews to Facebook.  Then Facebook eliminated the Notes feature and all of my entries in it, so I had to resort to starting yet another thread in my blog. This one is devoted to travel.
And so here we are.
This year, I visited Oklahoma and Arkansas.  These are my horrible, superficial thoughts.
The Start: Oklahoma City

Oklahoma City has a big-city reputation but it has a small downtown. Its buildings are ten or twenty stories tall for a few blocks in the center. After that, building height diminishes as the municipal area sprawls out into districts of warehouses, residential developments, and shopping malls.

There are some exceptions but most of the buildings beyond the central blocks are not much taller than in downtown Frederick. The canal is more functional than the Carol Creek canal and it supports tour rides. It is not as pretty, though, and I don't know if it's been tested in a flood. Rather than comparing Oklahoma City to other large cities, I found myself comparing it to mid-sized places like Harrisburg, Reading, Rochester, or maybe Indianapolis.

Oklahoma City seems reasonably priced for a big place, which was a nice discovery. Food prices were about as I'd expected, designed for tourists. Parking was cheaper, though, only four dollars for the day in downtown. We parked and stayed mostly in the Bricktown district near the Oklahoma City Dodgers ballpark.

Of course, that's where the American Banjo Museum is.

We hadn't planned ahead on the museum but, once we discovered it, we had to go in. Admission was cheap and the woman at the ticket window smiled and volunteered to give us discounts based on the excuses she could think of at the moment. For a while, I thought she was going to walk through the museum with us and tell us about each exhibit personally but she strolled just far enough to make sure we turned on the history tour recording for a good start.

Well, the chronicle of banjo development is romantic but sometimes sad. The instrument started out as a creation of poor negro communities. At first, their banjos were homemade. The museum has examples of those although mostly from the post-slavery era.

Then the banjo spread from the negro south into other communities around the country. After a few years on the fringes of musical scenes, it leapt into mainstream popular music forms like ragtime and dixieland jazz. Finally, it faded during the Great Depression. That happened possibly because, during the jazz age, other instruments rose in popularity but also it could have been because instrument manufacturers started charging top dollar for the best banjos. When people didn't have money, even an instrument born from poverty seemed inaccessible. Banjos went almost completely missing during the music of the World War II era.

After the war, people in Appalachian towns started to re-popularize the banjo. It was, once again, sometimes homemade. It was cheap and convenient enough to take from church to dance hall. The instrument achieved its mainstream presence through bluegrass, country, and a jazz revival. And of course it's been hanging around in the American music scene ever since.

I wandered around the museum, thinking about the history and taking pictures of the banjos. Sometimes I laughed about the ingenuity of the people who made their own instruments.

Have you noticed the round, open-backed bodies of banjos? They were made that way because the company that pioneered commercial banjos was a drum maker in Baltimore. The firm's craftsmen created banjo bodies in the same way they made drum tops.

During our tour, I noticed the director's office, off to the side from one of the top floor exhibits. The office walls were stacked with banjos and muppet dolls. The layout was so entertaining that I stopped to take a picture through the glass door.

The director noticed. He decided to open his door, let us in, and eventually he gave us a tour of his muppet dolls. As it turned out, he had played banjo behind Kermit in a few video scenes, so he had met Jim Henson. Naturally, he became a fan. Diane and I had to share that my parents knew Henson at University of Maryland and that their acquaintance was the reason that I almost got named Kermit. (That probably would have been okay for a little while, maybe until I was eight, when my little brothers started watching Sesame Street, or when I was ten and The Muppet Show burst onto the scene.)

After we finished our tour, we watched the director help another staff member shoot a banjo history video for a while. Then we headed out on the road.

We drove east across Oklahoma along route 40. That's how we stopped at Okemah, almost randomly. We were looking for local coffee. The regular place was closed, though. The nearby cafe was closed, too. The doughnut shop had closed at 1:00 p.m. but at least it had been open earlier, unlike the others. Too many of the small town shops were abandoned and boarded up. In an alley between buildings, we saw a tarnished copper statue.

It was Woody Guthrie. Okemah had been his hometown. That's why they had a statue of him.

There wasn't much else besides the statue, though. Only the McDonalds and Sonic were open for business. It's too bad because Okemah had once been a larger place with what must have been a thriving downtown, maybe five blocks long. Instead of local sights, we had to settle for McDonalds coffee and a drive back to route 40 heading east for Lake Eufaula.