Not Even Not Traveling 7: Oklahoma and Arkansas Vacation, July 2021 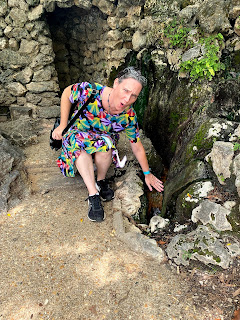 After our start in Oklahoma City, we stopped at towns with populations of 3,312 (Okemah), 49 (Clearview), 2,886 (Eufaula), 1,621 (Murfreesboro), and 1,248 (Bonnerdale). Although we did stay overnight in Fort Smith, which is a decent-sized city, we didn't get to see much of it. We strolled inside one restaurant and a park.

What this means is that, when we arrived in Hot Springs, the place looked huge. It's got a population of 39,111 but it seemed like more. Technically, it's smaller than Frederick. So are a lot of well-known places. Brattleboro in Vermont has 12,042. Travel reviewers consider it vibrant! Sturgis with 6,958 is a South Dakota tourist site and home of a motorcycle rally. Seaside in Oregon has 7,020 and it's another big tourist town. Hot Springs is many times their size and, with a main drag that boasts statuary, parks, a promenade, and grand hotels, it feels significant after so many smaller places.

So I guess city reputation is base partly on comparison.

The main drag in Hot Springs is a dozen blocks long and it's tall, too. It represents the end of the 'food desert' of eastern Oklahoma and western Arkansas. As you might expect, it's still not a mecca for foodies. It's not going to appear on anyone's 'best eats' list (sorry, Hot-Springsians). Still, the stores aren't boarded up or closed. There's no Taco Mayo and no Sonic in sight. After a few hundred miles of little else, that's amazing.

Local eateries offer quirky menu choices at semi-usual hours. That is, they don't close at 1:30 p.m. They keep a full day schedule (although they may close at 8:00 p.m. so you have to check). The local breweries offer slightly-different-than-usual drinks because they use local mineral water as an ingredient. The minerals are a popular selling point; they're what tourists come to experience, after all.

We toured a bathhouse museum. Then we walked around town and found the springs. There's a pair of them in an alcove behind the main street, between the health spas and the promenade. (The promenade is a brick walkway wide enough for a dozen people to stride along, shoulder to shoulder. It parallels the main street of the town but allows no cars.)

The springs are like the one I grew up with on Black Rock Road. By which I mean, they don't bubble. They look like standing pools of water. The differences them and puddles are a) springs never dry up, b) they trickle downhill, and c) they never freeze over even when all of the other water has frozen. There's also a d) I suppose, which is: if you're a curious teenager, you might reach into the Black Rock spring, repressing shudders, to grope in the dark, murky water. You'll get to the bottom of the silt, where you can imagine that leeches are finding your fingers tasty, plus you can verify the spring by feeling water push out into your hand.

You might do that twice, the second time to impress a girl. (Fair warning: she'll be disgusted as much as impressed.)

You might not do that with the hot springs in Arkansas, as it would get uncomfortable. In fact, it's worth mentioning another difference. The algae around the hot springs is unique. It grows in water at 140° fahrenheit - it prefers high temperatures, in fact - and it's bright green and apparently happy.

A park at the other end of downtown features the Hot Spring Falls. It's worth the hike. The falls are where water dribbles out of a spring high up on a rock wall. It flows down across a plate of lime-green algae, pools at a midway point, trickles again over fallen stones, and comes to a rest 50 or 60 feet later in a hot pool with more extremophile algae. There, teenagers hold contests to see who can hold their hands in the hot water the longest.

The contest answer is: "He did it! What a dummy!" Fortunately, no one gets hurt.
Posted by Secret Hippie at 8:29 PM