Not Even Not Traveling 8: Oklahoma and Arkansas Vacation, July 2021 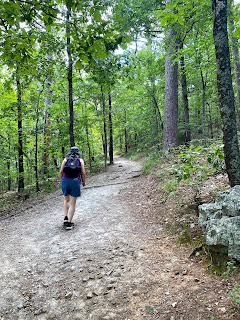 The Hike and the Spa: Hot Springs
During our dinner at The Grateful Head, Diane and I tried to figure out where we wanted to hike on the next day. Our choice was the Hot Springs Mountain behind the main line of buildings in the city that the locals call "bathhouse row."

The prospect of walking up on my bad left foot didn't seem like much of a risk. I had been hiking on it before and the main problem was that it slowed me down, which inconvenienced anyone with me. At the diamond mine park, I tramped through the mud with Diane, slow but steady. A mountain seemed like no problem.

As we made our way through downtown, we saw more of the hot springs. They're fun but, as before, they are not impressive to look at. Two of them are available as free water. I'd guess that one of the sources must not be hot because we saw a team of three adults, probably spring-water resellers, filling a hundred plastic jugs. They were making off with a truckload of free city spring water. They didn't seem to be feeling any heat from their tap source.

Farther up, a quarter-mile along the promenade, we turned south and uphill onto a trail. At first, our way was neat and paved. As we climbed and connected to other trails, the path got ragged. It turned into rocks and dirt. By the time we reached the top of the mountain, the trails were just dirt. At the top, however, we crossed a road (you can drive to the top, too) and found the observation tower.

It seems ridiculous to take the elevator to the top of the tower. But my advice to other visitors is, go ahead. You're at the peak. You might as well look. (Anyway, you'll notice that they've closed the stairs so that you have to pay to take the elevator.)

We looked. It was good. You can see across the Ozark mountain range.

It was a long hike back down at the spas but we made it in time to report for our appointments. There are no appointments for couples in the traditional spa, where men and women are separated, so we had separate appointments at the same time.
Here is what the traditional, 100 years old spa treatment consists of:
All of the treatments on my side of the house were by men and for men.

The treatments on the women's side were supposed to be equal. We noticed these differences, though:
Back in 1900, twice as many men went for spa treatments as women. Nowadays, the proportions are reversed. There was a crowd on the women's side of the spa. Diane had to sit tight between stages. That meant, by the end of her treatments, she was twenty-five minutes behind me. Finally, we could compare experiences.

I was a little jealous of her extra towels. She was a bit shocked that the men don't drink water.

Posted by Secret Hippie at 4:00 PM