Not Even Not Traveling 4: Oklahoma and Arkansas Vacation, July 2021 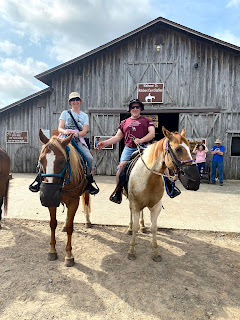 Planned: Horseback Ride and Spontaneous: Spiro Mounds
We only planned the horseback trip a day in advance. We made reservations in the evening and returned in the morning to Robber's Cave State Park. We contracted with the way-too-kid-friendly trail riders. We wanted an excuse and this was it: the riding trail went up into the foothills of the Ozarks.

Eight people reported in with us. At that point, I knew it wasn't going to be a great ride since what we like best is hearing about the countryside as we go. In a large group, you can't get close enough to ask questions. You can't hear responses. Trails through the hills are single-file.

"What horses do we have left?" the owner said as she pulled one of them out of the lineup. Her attitude woke me up. She didn't want to give the one she had to a child or to the oldest woman in the group.

After a few minutes, one of the guides brought the problem horse to me.

"His name is Apache," she said.

"Don't let him bite the other horses," the owner warned.

Diane observed that I usually get the problem mounts. There is something about me that makes the owners of these stables look around and single me out for them. I get handed the reins at the same time as I hear phrases like, "He's a little frisky," "She bites," or "Try not to let her eat." It's fine by me. A tough-minded horse gives me something to do. When the ride is boring, the mount will usually try to do something bad. That keeps both of us occupied for a minute.

On this ride, sure enough, Apache kept trying to bite Max, the horse in front of him. Max was slow and, I had to notice, not terribly sure-footed. Apache seemed to feel he was better than that. Behind me, Diane sat on a roan gelding named Doc. Bless him, Doc acted well-trained. He didn't give Diane any trouble. Apache kept me busy.

The mountain trip was pretty but unfortunately, it remained uninformative despite my attempts at questions. The guides couldn't tell us about the flora or fauna. Their horses were well-trained, though. That's where they excelled, except maybe for Apache. I started keeping track of the number of times I kept Apache from biting Max .. 9, 10, 11. Then I made a mistake. We all paused on the trail and I relaxed. I talked with Diane behind me. Apache took a step forward and bit Max. It took about a second. I was just too slow to pick up the reins when I felt him move.

Then, when I opened my mouth to apologize, I got confessions and apologies from the rider in front. They were certainly uncalled for since it had been my mistake.

"I know you said to kick Max but I can't," she explained.

"Sorry, I wasn't paying enough attention to Apache." I tried to express regrets between her contrite phrases.

"Max is so slow!" She apologized for another minute, all because my horse bit hers. And it's true that her horse was cautious and moved at his own pace. But I knew what Apache was trying to do and I let myself drift mentally anyway.

As an aside, horses are awfully tough in their bodies. If you haven't dealt with them, you might not have a feel for it. Even if you could give a horse a hard kick from the stirrups, which you can't, the horse is only going to notice it as an indicator of your intent. Really, a full grown horse can't be bothered by your only-human strength. Conversely, though, a horse's mouth is sensitive about the bit in it. There's never a need to tug on the reins. Doing that just hurts the horse for no reason. Even in my one-second reaction, I didn't tug. I put pressure on the reins. Apache felt it. That was enough.

After the trail ride, I let Diane decide the tip and we said our goodbyes. We hopped in our rental car and followed the GPS to Fort Smith, Arkansas.

It was one of the longest legs of our journey. We had time to contemplate the Appalachian-sized hills that lead up to the Ozark plateau.

What's odd about the region is that everything else was underwater long ago but not this place. You've probably read that there was an inland sea in North America for hundreds of millions of years. Well, the Ozark plateau was an island in that sea. It was a volcanic ridge. If you know where to look, and we didn't, you can find the sediments of fossilized corals that once surrounded the island. The mountains themselves are the eroded remnants of the ancient island range.

Instead of thinking about the Ozarks, though, I was mostly navigating traffic and grumping about my coffee. It was Diane who took in our surroundings and noticed a sign for the Spiro Mounds. 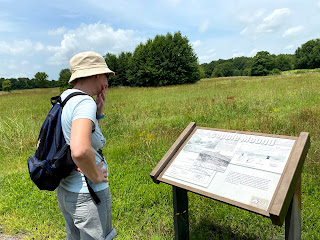 The American Indians who lived at the Spiro site were part of a Mississippian culture. As artisans and artists, they totally rocked, apparently even better than the related inhabitants at Cahokia.

When you look at the remaining Spiro mounds, though, you have no idea. They don't look like much. You would pass them by in the woods without thinking about what they are. However, the human-made objects taken from the ground have been historically impressive.

The weirdest part about all of this stuff at Spiro is that we don't know about the treasures because of archaeologists. We don't know from the descendants of the Caddoan Mississippians. Instead, we understand them due to treasure hunters.

In the 1930s, some men legally bought the rights to tunnel into Craig Mound, the second largest of the Spiro Mounds. It was the Great Depression, after all, and they had the idea to mine the place for artifacts. They exposed a hollow burial chamber inside Craig Mound. That burial chamber, previously unknown, contained the best pre-Columbian artifacts ever found in the United States.

The treasure hunters discarded many of the the most precious items because they were fragile. (Yes, it's horrible. The artifacts were superbly preserved textiles or feather jewelry. If they weren't burned by the excavators in campfires, they soon rotted on the ground.) The less fragile items, they sold to art collectors. Fortunately, even those artifacts included works of perishable materials that were nevertheless preserved in the conditions of the closed Craig Mound chamber.

After the sale of most of the Caddoan Mississippian items, the United States stopped the excavations. In fact, the government bought back many of the artifacts, which are now held by the Smithsonian.

It was all because of the treasure hunters. And as a coincidence, we had something planned for the next day. We were about to go treasure hunting. For diamonds.

Posted by Secret Hippie at 8:52 AM