Not Even Not Traveling 5: Oklahoma and Arkansas Vacation, July 2021 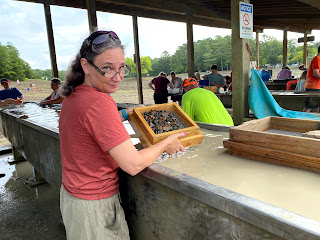 Diamond Mining in: Murfreesboro
We arrived at the Crater of Diamonds State Park in Murfreesboro before it opened. But that's not where the work began.

The reason we could get in, equipped correctly, was that Diane did so much work before we even crossed the state border. Yes, I was there renting the equipment, paying the entrance fees, digging up gravel with her, slogging through the gullies, hauling buckets of sludge, working the sifters in the muddy water, and sorting the stones. But Diane did more than one day of work, a lot more.

She researched the site. She studied the methods that work. She found out where to rent the right equipment. When we were done for the day, we left with material to sort. She continued to look through our pebbles for the diamonds on the next day and beyond.

"Can you pour an eighth of the bucket onto the big sifter?" she asked.

When we get going on a project together, we enter a different mode. We think about the facts in front of us. We see little problems and solve them. Sometimes we don't say much. We can get that way when gardening or hanging drywall or almost anything. That's why it's hard to picture doing this with anyone else. At one point, she handed me a bucket with sludge that had turned to natural concrete.

I scooped some water into the bucket, mixed it with the sludge, and got out some lumps. She positioned the sifter to make the process easier. I repeated stir and pull until I got most of the natural concrete broken up and into her sifter.

I had worried that the digging would be awkward. It was. But I thought I'd re-injure my legs because of it, pushing too hard on the shovel with my foot. In fact, one of the hints for finding diamonds is to find stream beds or any place with water that would have washed diamonds and other interesting rocks into collections of detritus. For that kind of digging, scraping the surface with a shovel is fine. You only want the first few inches of soil.

Basically, we could twist our ankles in the mud or falling into gullies but it was no more dangerous than that.

The process of searching for surface diamonds is tedious, though. It involves a lot of sifting and then re-sifting. The remaining pebbles need to be set out to dry. Then they have to be sorted. You want to pull out the best translucent candidates to test for diamonds.

The diamond mine staff are willing to look at diamond candidates and verify them. But of course they expect to see only the most likely candidates. In our last run of the day in the diamond crater, we walked down a grubby stream and found deposits of gravel and silt. We sifted it. From that batch, Diane located our first strong diamond candidate.

According to the park staff, though, it was a deceptive piece of calcite. They were more impressed that we found amethyst. At this site, that's more rare than diamonds.
Posted by Secret Hippie at 2:21 PM