Not Even Not Traveling 2: Oklahoma and Arkansas Vacation, July 2021 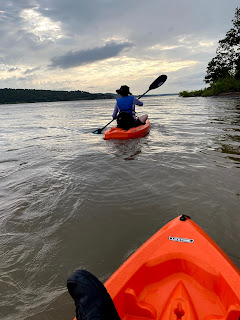 These yearly trips around the country started because my wife and I didn't have money when we got married. We couldn't travel to a fancy place for our honeymoon, so I promised to take us to all of the states in the union. Eventually.

For the first few years, I planned and drove us around in the manner to which I had become accustomed. That meant we did everything on the cheap, a step above hitchhiking. I made arrangements on the fly. We camped or slept in the car. When we got hotel rooms, they were the cheapest available. They came with free breakfast. Breakfasts meant stacks of free apples and bagels piled high, snuck into our backpacks, and saved for lunch or maybe dinner.

It has been more than two decades, now, and seven job promotions since we started. We can travel by plane. Diane long ago took over the planning. Even so, this year I was struck by how much of travel is still closed to us.

We can get near many places that are rich in natural wonders. Every state has them. Oklahoma is more lush in land and resources then we would have believed from reading about it or watching the news. But if you want to go out on a nearby lake in a boat, it is $5000 per day to rent a boat that holds ten people. So that's an experience we won't have. Most people won't. Lake Eufaula is a human made reservoir, a recent development in the scheme of things, but it is effectively off-limits to many of the local residents. The restriction is not a legal one but it is a factual one.

Oklahoma has plenty of people who own farms or other mid-sized business. It's got a lot of descendants who didn't inherit farms or businesses, too. Those are the people you won't find on the lake.

"Well, you didn't like that one but the other is closed," my wife said as we looked for food in Eufaula.

"Wasn't there a third local place?" I asked.

It was hard to find anything but the cheapest of chain fast food restaurants. Oklahoma seems to be sort of a food desert. When we followed recommendations to local restaurants, either they weren't much good, had closed for the day, or they were closed forever. Closed forever was pretty common. We live in Frederick, which can spoil you for food options. Maybe we weren't making fair comparisons. But Sonic, McDonalds, and Taco Mayo were open in most towns and usually they had no local competition.

In this case, there was one local barbecue choice. It was a restaurant run by a woman who spent all day smoking not only brisket, pork, and chicken, but a couple of things that we haven’t had other places, turkey and bologna. The smoked bologna was more than half an inch thick. The taste was good although the texture was, well, odd. It made me think that you could smoke a block of tofu and get people to like it.

Smoked bologna is not for everyone. It was the last item left on my plate.
Posted by Secret Hippie at 4:44 PM