Not Even Not Traveling 3: Oklahoma and Arkansas Vacation, July 2021 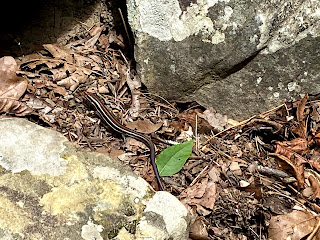 Even More: Lake Eufaula
The food desert section of Oklahoma continued the next day. We looked for a Italian restaurant near town. It was permanently closed. There was not another within 90 miles. (Come to think of it, that distant one was probably closed, too.) We looked for an Americana style grill. That was also closed. We tried the sports pub, closed. There was a Mexican place, open but unappetizing. Sonic was open. McDonald’s was open. And Taco Mayo.

On the edge of town, we decided to try a local chain restaurant called Boomerang Diner. We really hadn’t been interested in diner-style food. However, Boomerang was clean. The service was the best in the state. The salad was only lettuce and tomato, but fine. The fried food was fast and smelled good. Diane ordered the ultimate BLT sandwich which really did come with at least half a pound of bacon on it, as advertised. I tried the ridiculous Frito Chili Pie Supreme. That was pretty good too. It had more vegetables (again, just chopped lettuce) than any other option. Most of the items on the Boomerang menu were ones that we would not try otherwise but, in that diner, on that day, we knew we'd found the best that Eufala had to offer.

"Where did you want to hike?" I asked Diane at the diner.

I was dreading the hike because of my sprained ankle but I was looking forward to it, too, because I was partly healed.

The drive to Robbers Cave Park took around 40 minutes. It's out of the way but totally worth it. It would have been even better with kids. The printed materials in the nature park are meant for kids. Likewise, there is a pool meant mostly for kids, a horseback riding outfit that catered to kids, and gourmet snowcones. Fortunately, even for grumpy old people not looking for any of that, the park was still pretty good.

The trail hiking was marked in a confusing way with signs from different eras and different skill levels crossing over each other. But the trails were still excellent. According to our map, we took the long walk around the crags surrounding the main cave. Halfway through, we met a bunch of kids who were participating in a rock climbing event. They took turns repelling down a cliff face and running back up to the top. They were having a blast. On the trail next to their cliff, Diane spotted a brown black and gold lizard among the rocks.

I crouched to take pictures. A little girl strolled up and asked what we were looking at.

“See the lizard?" I pointed.

"He's holding still right now so we can’t see him.”

In the loudest stage whisper ever, the girl leaned to my ear and hissed, “But we dooo!!!”

She and her girlfriend scared the lizard under a rock, much to their mutual delight, and we all moved on.

Also on that trail was a loud and shy family, both types at once. Several times during our hike, we crossed paths with them. They were led by an Oklahoma man who had married an Indian woman, and she kept silent. The father had dragged along his two daughters, as well, apparently with the purpose embarrassing them to judge by their expressions. He was loud. He liked sharing trail advice. His enthusiasm was enormous but he, like us, kept having trouble locating the actual Robber's Cave.

“If you find it, give a shout. I mean it!” He pleaded. He daughters stepped back farther away from him, arms folded.

As we continued, Diane and I passed by the mouth of the cave, which was hidden. We totally failed to notice it on our first try. When we circled back up the steepest climb up the mountain, following the map, we encountered the same family again. We met them just after they found the cave.

This time, even the daughters seemed happy. At least, they were more relaxed. We all went into the cave together although 'cave" is not really a good term for it. It is not really a cave system, just a natural hideout that outlaws used repeatedly in the 19th century. By the third or fourth time, the local sheriff must have known.

I imagined that he could have just hitched up his belt and said, “Well, we’ll catch them at their hideout. We know where it’s going to be.”

The place is nice. It's dry. It's got room to keep your horses or even some cattle. I wouldn't mind spending lots of time camping in it. As a shelter, it's great and it's relatively hidden. But once you've been there, you can find your way back. That means the officers of the law can find it, too.
Posted by Secret Hippie at 5:21 PM