Not Even Not Traveling 6: Oklahoma and Arkansas Vacation, July 2021 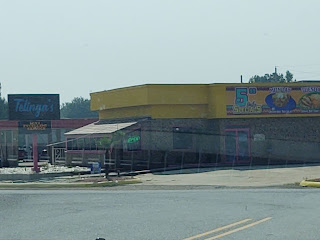 Day Six: Murfreesboro
Small towns in western Arkansas have better food than Oklahoma towns. Just not by much. In Murfreesboro there were three restaurants. Normally, we don't eat Tex-Mex food so we avoided the place called Terlinga's. However, by the dinner on our second day, we had tried the other places and didn't want to go back. Also, we had noticed that Terlinga’s seemed to have the busiest parking lot in town. We thought that might be a good sign.

When we sat down inside, we asked about the name.

"That's my grandmother," the waiter explained.

Terlinga is also grandmother to the waitress, the hostess, and the cook. Despite its large menu, the place is family run. The ingredients are good. The cooking and service are good. Terlinga's is the place that all of the locals recommend and I have to agree.

"Do you have a drinks menu?" Diane asked.

"Hah!" The waiter burst into surprised laughter. "This is a dry county, ma'am."

So we can't recommend the margaritas. But otherwise, yes.

Around this point in our travels through the Ozarks, Diane realized that virtual learning was never possible in the area, and not for hundred of miles around. It's a big region. It's got plains and mountains. It's got a lot of people. But virtual classes during the pandemic lockdown were not an option.

"These students can't have Zoom meetings even if they have the equipment. And they probably don't."

That got me thinking, too. I had AT&T as my cellular carrier and I'd been traveling with one bar on my phone, sometimes none. Diane had Verizon. Her phone usually had no signal. The best internet connections available in Eastern Oklahoma and the Ozarks came through satellite hookups. Those satellites had the bandwidth of a 1974 Ford Ranch Wagon thrown into space. I mean, technically someone could bounce a signal off of the satellite. But it's hard to feel satisfied with the results when you really need to communicate.

Even in a building with internet connections, attempts to send email back through the satellite failed. Yes, that means, going upstream, even plain-text messages timed out. It was worse than dial-up. Downstream, the satellite could broadcast television signals. Clearly, that's where all the bandwidth went, however much (or little) there was.

Between the crap satellites and the non-existent cell towers, it's fair to say there was essentially no internet service.

This led me to remember that, in eastern Oklahoma, I hadn't seen people using their cell phones. That is, folks didn't look up anything that takes data. They couldn't. The phones are not a source of entertainment. You don’t see them out of pockets or purses. After a few hours of travel, we didn't take ours out, either. Most of the time, cell phones can only be used in the region for calling and, even then, only under favorable conditions.

"We saw a school back there," Diane announced during our drive.
"We did?"

"Now that I think about the parking lot, it had wifi stations set up in it." She pointed back and to my right although it wasn't like I was going to turn the car around. "I think that's how they isolate the students when they need to do it. Parents drive to the parking lot. Everyone gets wifi from the school. Then they can reach the teacher."

"Who is also in the parking lot, also on school wifi."

For us, it was a mystery solved. Partially, at least.

Another oddity for us about eastern Oklahoma and western Arkansas was discovering that maybe twenty percent of the stores are thrift stores. In small towns, they are market influencers. They offer fairly nice clothes, too, because they are the main source of clothing for the area. They offer DVDs and video tapes because those don’t require any bandwidth to download. For the entire week of travel, I saw no one with a laptop computer. The Oklahoma economy seems to depend on farming, ranching, and possibly crude oil. The Arkansas economy looks like logging and tourism.

Of course, as we could see in our bed-and-breakfast stops, the majority of folks in the region have computers. They simply have no way to travel with them. There is very little wifi and not enough cellular signal to keep a laptop online at any local store.

A few smarties could park in a corner of a school parking lot, I suppose, when the wifi is on.

And just as thrift stores seem to provide a lot of the local clothing, Dollar General seems to provide the majority of the food. It offers mostly packaged, heavily processed stuff but it's cheap and it's mainstream. I hadn't envisioned a place where Dollar General would be the main provider. Now I've seen it - and over a wide area.
Posted by Secret Hippie at 5:30 AM